Anyone who watched the 2009 Kentucky Derby remembers the rush of watching the long-shot contender, Mine That Bird, start dead last and finish first in a breathless, come-from-behind upset you thought could only happen in the movies. The victory was so unexpected that the network sports announcer didn’t realize the figurative dark horse had taken a significant lead in the home stretch until a few seconds before the race ended. Not surprisingly, the movies have decided to tell the story of the thoroughbred’s history-making run. The title of the well-intended but pokey 50 to 1 refers to the betting odds stacked against this wonder horse’s victory at Churchill Downs, which diminished considerably upon subsequently competing in the Preakness and Belmont races the same year, placing second and third, respectively. Though infinitely more real than the symbolically bloated Seabiscuit of over a decade ago, 50 to 1 never completely gets under the skin of horse racing, choosing to focus more on a true-life narrative (with an abortive romantic angle) rather than show how this gelding upended the elitist racing establishment with his mind-blowing win. There’s a lot of talk in the film about training the smallish and unconventional Mine That Bird – he took long strides with slightly crooked feet – but you never see this preparation, except for a gallop around the track here or a snippet of conversation about racing strategy there. In other words, you don’t see how he moved from A to B, much less to any other letter down the alphabet. As depicted here, the horse’s Derby victory is more a miracle than anything else, a perception that diminishes his spectacular achievement.

Still, everybody loves to root for the underdog, so the odds are you’ll find yourself liking 50 to 1 despite its shortcomings. In the role of the determined New Mexican trainer, Chip Woolley, Ulrich looks and talks like a cowboy, though he’s given little to do dramatically except hobble on a crutch for most of the film. (Close your eyes and Ulrich sounds a bit like an iconic actor who played more than one Westerner in a long career.) The scenes in which Ulrich negotiates with Bird to step up his game in a heart-to-horse conversation may seem silly to some, but it will endear him to every animal lover in the audience. The most compelling figure in the film, however, is jockey Calvin Borel, who is played by himself. At first, it seems a chancy move to cast an amateur in the role, but Borel more than compensates for his lack of smooth acting skills in those moments in which he relives that day in May 2009. The man’s genuine happiness and humble joy in the winner’s circle will bring tears to your eyes. If you don’t make it to the theatre to see 50 to 1, at least watch the horse race of the century on YouTube and catch this amazing rider’s feat. You’ll see why they don’t call him “Calvin Bo’rail” for nothing. 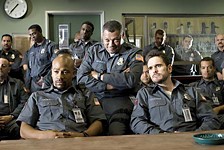 Armored
An armored truck robbery of $42 million is an inside job in this action film starring Matt Dillon, Laurence Fishburne, and Jean Reno.