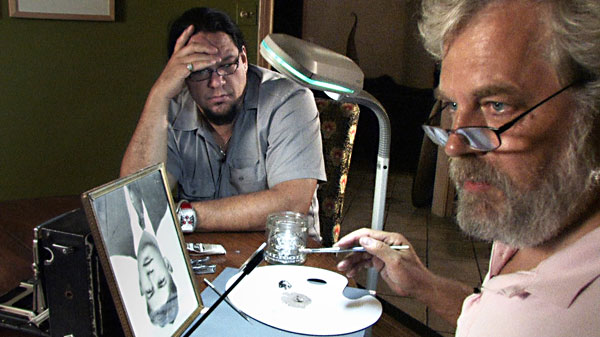 With its brief running time and revelatory story, this neat, fascinating documentary ought to be required viewing for art history students everywhere. Directed by Teller and narrated (on- and off-camera) by Penn Jillette, the film follows Tim Jenison, the San Antonio-based tech inventor (Video Toaster, among others) and all-around curious fellow, on his quest to solve the mystery of how Dutch master Johannes Vermeer painted photo-realistically 150 years before the invention of photography. It’s an obsessive task that Jenison undertakes, but as Teller’s documentary makes clear, Jenison is thoroughly swept up in seeking the answer – so much so that he re-creates, from scratch, Vermeer’s exact working conditions, including the entirety of the artist’s studio, right down to the shadows on the wall.

That last seemingly trivial detail is all-important, as anyone familiar with Vermeer’s Girl With a Pearl Earring or The Music Lesson knows. Jenison, who has never painted before, chooses to attempt to reproduce The Music Lesson. The interplay of light and shadow in Vermeer’s work is impossibly subtle and visionary; his paintings really do look like proto-photographs.

Jenison’s theory, one supported and written about previously by English artist David Hockney and architect Philip Steadman, is that Vermeer utilized a mechanical device involving a camera obscura that, in essence, allowed the artist to “trace” his works off a mirrored image thrown directly onto the blank canvas. This is not a new idea, but it’s never been tested so thoroughly as it is here, and Jenison’s journey from concept to finished reproduction (an endeavor that ultimately takes him four full years) is a hoot to watch. Director Teller cannily uses time-lapse photography to show the gestation of Jenison’s faux masterwork, while Jillette opens up the backstories of both artist and imitator.

It’s obvious in hindsight why Penn and Teller would be so drawn to this ethereally beautiful mystery: Their passion for all things seemingly magical, often mechanical, and always amazing is practically their trademark. I was surprised that Ricky Jay didn’t pop up at any point in the film to offer snarky remarks, but then this is yet another chapter in the wondrous (and always intellectually rigorous) Penn and Teller magic act. And now their friend Tim Jenison is a magician, of a sort, in his own right.