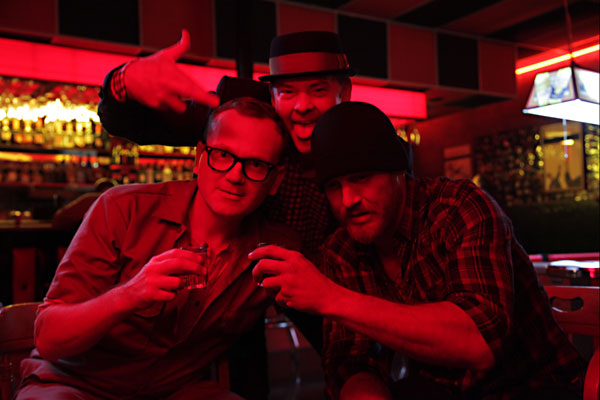 Last year's SXSW Film Midnighters Audience Award winner, Cheap Thrills, is a dark comedy that riffs on the ever-widening rift between the haves and the have-nots. It also plays around with the idea of the generally debasing nature of reality TV vs. the morphing version of reality that comes from too much sex, drugs, and not enough moolah. Above all, though, it's about the divisive nature of greed, and a creepy-funny broadside against capitalism itself. Erich von Stroheim might have made the definitive film about human swinishness way back in 1924 – sorry, Gordon Gekko – but Cheap Thrills cuts deeper, darker, and straight to the bone.

Failed writer and family man Craig (Healy, of Ti West's The Innkeepers) starts his lousy day with a $4,500 back-rent eviction notice tacked to the door of the apartment he shares with his wife and 15-month-old child. The day grows even worse when he's let go from his job as a lowly grease monkey. Seeking solace from his financial woes in a seedy dive bar, he runs into an old high school pal, Vince (Embry), who's also on one of the lower rungs of the ladder to success. A strong-arm thug for a loanshark, Vince shares Craig's pain but offers no real comfort until millionaire lounge lizard Colin (Koechner, playing it broad and obnoxious) shows up with his snaky wife Violet (Paxton, another of The Innkeepers) in tow. Many rounds of tequila ensue – Colin's never-ending wad of cash paying for it all. A series of increasingly dangerous – not to mention humiliating – bar bets begins and then escalates into a frenzied, polarizing, mad grab for the rich man's money. Unsurprisingly, nothing ends well for anyone.

Writers David Chirchirillo and Trent Haaga keep upping the ante in perverse and horrifying ways, but Cheap Thrills isn't really a horror film per se. Notably, it borrows from Roald Dahl's short story "Man From the South," which was later adapted in a memorable episode of Alfred Hitchcock Presents that starred the improbably perfect duo of Steve McQueen and Peter Lorre. Cinematographers Andrew Wheeler and Sebastian Winterø keep their queasy compositions pinwheeling from jittery to soused, mirroring both the intoxicating qualities of liquor and pills, and cold, hard cash that result in the worst night of Craig and Vince's lives. It's not a cautionary tale insomuch as it's just the story of two suckers waiting for good dough. Laugh, clown, laugh.

Shoot to Thrill
Sara Paxton on all the awkward and awesome moving parts behind E.L. Katz's 'Cheap Thrills'