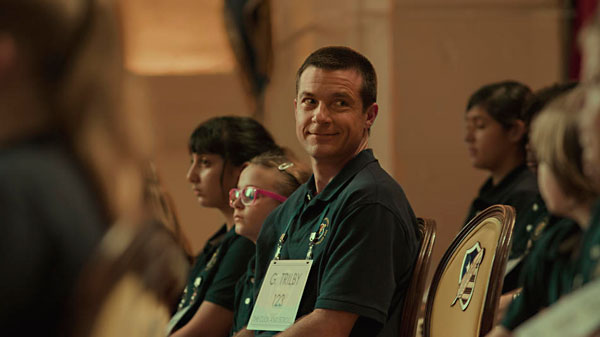 In Bad Words, Jason Bateman demonstrates that he is in full control of his onscreen identity: playing characters who express themselves with humorous timing and sardonic wit. Bateman stars in Bad Words, and also directs (making his feature-filmmaking debut, after directing a number of TV sitcom episodes). The result is an amusing, though never hilarious, comedy, with a script by Andrew Dodge that aims to do for spelling bees what Bad Santa did for shopping-mall Santas. Although Bad Words never quite achieves Bad Santa’s level of misanthropy, the movie is chock-full of racist, sexist, and generally antisocial barbs – not to mention a slew of bad words.

Bateman plays Guy Trilby, a grown man who finds a loophole through which he enters the Golden Quill spelling bee, where he competes against the nation’s best prepubescent spellers. The whys and wherefores of Trilby’s stunt are saved for the film’s climax; until then, the character’s motivations remain a mystery. The final revelation does little to make Trilby’s disruption of the bee seem reasonable or make the character more likable and/or redeemable. On a certain level, you’ve got to admire a movie that maintains its cynicism down to the very end.

Trilby is accompanied on his quest for the Golden Quill trophy by Jenny Widgeon (Hahn), a newspaper reporter who senses a good story lying at the heart of Trilby’s odyssey. She also, on occasion, sleeps with her subject, albeit in a self-loathing sort of manner. Allison Janney and Philip Baker Hall perform the thankless task of playing the spelling bee’s chagrined directors, who do everything within the rules to thwart Trilby’s progress. Assigned to sleep in a janitor’s closet instead of a room at the hotel where the bee takes place, Trilby befriends Chaitanya Chopra (Chand), a young Indian-American competitor who has a room on his floor. Trilby raids Chaitanya’s minibar, and introduces the studious, strait-laced kid to booze, boobs, and blowing off work. It’s the most compassionate and nurturing relationship Trilby has.

Ultimately, Bad Words is more about bad attitudes than bad language. Like Bateman’s best-known character Michael Bluth from Arrested Development, Guy Trilby is a man who holds back more than he reveals. That comic tension is the crux of this film; without it, Bad Words would just be one more story about a stunted man-child. 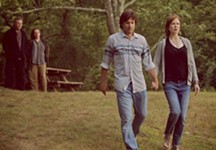