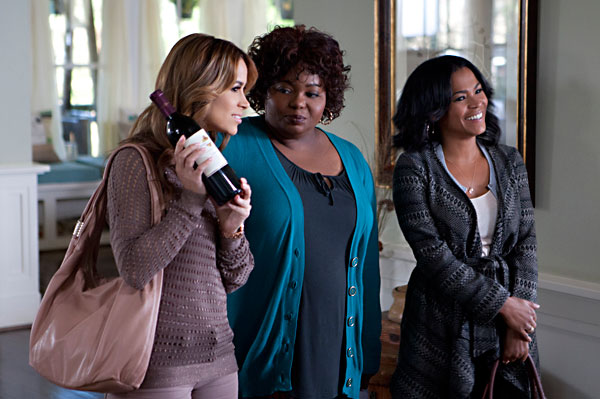 As ridiculously prolific a filmmaker as Tyler Perry is, it’s reasonable to expect that his skills would grow more proficient over time. His last film, Tyler Perry’s A Madea Christmas came out in December, and now, three months later, Perry has another film before us in theatres. Perry has found a built-in yet underserved African-American audience for his movies, although it’s starting to seem that if Madea – the sassy matriarch Perry plays in drag – isn’t part of the package, viewers are more likely to stay home.

Although Perry makes no cinematic advances in The Single Moms Club in terms of his rudimentary camera setups, this film stands out for a couple of other reasons. The central cast of five women includes only two characters who are black. Of the others, two are white, and one is Hispanic. Perry, along with these characters, discovers that single moms have it tough, and that their difficulties cross all racial and socio-economic divisions. Perry’s films are also identifiable by their Christian homilies and uplift. Although the uplift is still present in The Single Moms Club, God and faith are largely absent.

However, it would be a mistake to assume that the support group formed by the film’s five moms is a sign that sisters are finally doing it for themselves. Despite their troubles with collecting alimony from their exes, all but one woman – the dedicated career woman – have lined up new suitors. Actually, we see very little of the women’s vicissitudes, or the ways in which they support one another through their club. The performances are generally good, with Cocoa Brown finding a range of nuances in her character. Never a filmmaker known for his subtlety, The Single Moms Club turns out to be one of Perry’s most distinctive efforts.