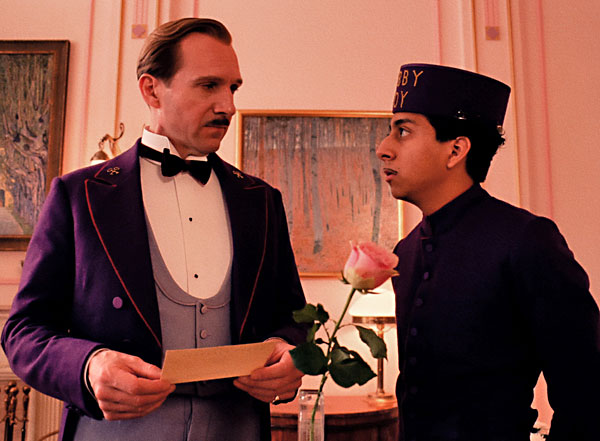 Wes Anderson could not give two tweedy fucks about the critics who ding his movies for being, well, so Wes Anderson-y. In the interest of fair play, we’ll admit the prosecution’s case: Anderson’s dollhouse aesthetic and Futura-fonted hyperstylization, the two-dimensional, proscenium-frame staging and affectless performances. (His actors always seem to be counting out one-Mississippi, two-Mississippi before registering an emotion.) Either you get it, or you don’t. With this latest, the writer/director doubles down on everything that makes a Wes Anderson picture so indelibly, irrefutably his own – everything that nudges the audience either all-in or peevishly on-the-outs. The verdict? The Grand Budapest Hotel is nothing short of an enchantment, one even the holdouts may be hard-pressed to resist.

The breakneck intro pinwheels through four time frames and three era-specific aspect ratios to get us to the titular hotel in 1932, set alpine-high in a (made-up) Eastern European country called Zubrowka. As the clock counts down to world war (that part’s true, though Anderson never puts a name to the jackbooted invading force), Grand Budapest Hotel memorializes the last gasps of Old World luxe and gentility. The narration in this Thirties stretch is supplied by the adult Zero Moustafa (Abraham), who describes the events of his first days as a teenaged lobby boy-in-training (played by Tony Revolori) at the Grand Budapest. Zero’s boss and mentor is the imperturbable concierge M. Gustave (Fiennes), a nattily mustached, one-man monument to, paradoxically, decorum and earthly delights. When asked about his relationship with Madame D., an octogenarian hotel regular (played by Tilda Swinton, deliciously rheumy-eyed and old-lady over-lipsticked), Gustave casually shrugs, so continental-like: “I go to bed with all my friends.” But when the moneyed Madame D. suddenly turns up dead, the police suspect Gustave of foul play, especially when her last will and testament bequeathes a priceless painting to him. A chase ensues – the first of many – and Anderson’s capering whodunit hardly stops for breath again.

The Grand Budapest Hotel is spry and sly, with tickling tributes to cinematic forebearers; there’s a sequence lifted whole cloth from Hitchcock that, no lie, made me clap in my seat, while a mountaintop set-piece put me in mind of both Black Narcissus and the 1941 Goofy short “The Art of Skiing.” (The soundtrack makes sweet music of yodeling; also: the zither, the balalaika, the humble triangle.) But maybe Anderson’s most especial gift is his effortless intermarriage of antic and tragic. There is the absurdist facade, yes – see also: Dignan’s harebrained heists in Bottle Rocket, oceanographer Steve Zissou’s jaguar-shark obsession in The Life Aquatic – but rap at the walls and melancholia comes echoing back. For all its surface larkiness, Grand Budapest bites off a meaty chunk of real-feeling agitation and ache in its depiction of Europe in crisis, the Old-World ways dying on the vine, and Zero’s émigré lobby boy, targeted by officials for his “otherness” and star-crossed crazy-in-love with Agatha (Ronan), a feisty baker. Worth noting: Anderson, a romantic, makes significant strides at carnality here, too. It suits him.

The Grand Budapest Hotel is a marvelous spectacle, the kind that begs for an in-theatre remote control in order to hit pause and wistfully linger on the halo-like lights that herald Agatha’s entrance and wow over the microdetailed production design (the jailhouse pinups are a gas, and there’s a reason the closing credits hat-tip a “brass knuckles buster” artisan; don’t get us started on Willem Dafoe’s oogly-boogly leather-jacketed baddie). But the real miracle is in how close we can feel to a Wes Anderson film when the levers and pulleys are so visible – when, intellectually, you’d think all the mechanics of narration, aspect ratio, miniatures, and “flat” affect would put the audience at a remove. In fact, it’s that very artful artifice – the storybookness of the thing – that pulls us in closer: that enchantment again. Whodunit? No spoiler here. Wes Anderson did.