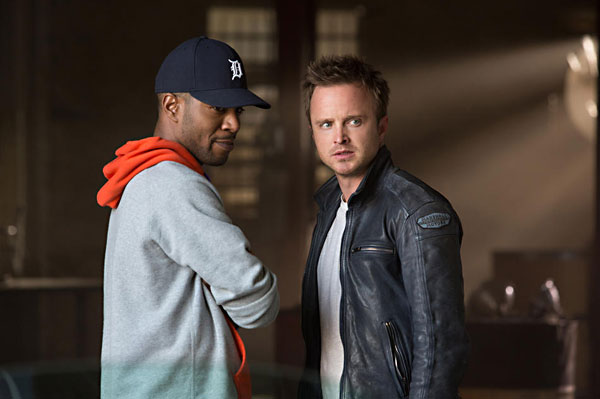 Need for Speed celebrates reckless driving with the bloodless consequences of an Xbox game rated for 10-year-olds. (Little wonder: The 3-D film is loosely adapted from the video racing series of the same name.) It’s an adrenaline junkie’s wet dream, a daredevil fantasy of sideswipes and smashups that never collides with the mangled reality of vehicular misfeasance. The car chase is a uniquely masculine film tradition in the mythos of the American male, the outsider behind the wheel who refuses to play by the rules. (In homage to this convention, a clip featuring Steve McQueen screeching through San Francisco in Bullitt appears near the outset of the film.) Here, the loner is Tobey Marshall (Paul), a blue-collar mechanic and amateur racer wrongly incarcerated for a close buddy’s death during a winner-take-all street race. Upon release from prison, Marshall decides to avenge those injustices by entering an invitation-only contest against his snarky nemesis (Cooper), a former business partner who framed him for the murderous act. (As the eccentric impresario who organizes this covert competition, Keaton alternately channels Wolfman Jack and Beetlejuice.) The cross-country trip that precedes the big race is the film’s centerpiece, implausible at every turn (and swerve) but respectable in its preference for stunt work over computer-generated imagery. Still, you could drive a Lamborghini through the script’s gaping illogic. From the start, Need for Speed smells like a movie in search of a franchise. On that count, it’s somewhat fast but seldom furious.

Squint hard enough and Aaron Paul could resemble Paul Walker, albeit a shorter, less tan version of the late actor. But the problem with Paul’s casting as the film’s rebel with a cause is that he’s an actor, not a matinee idol. In his initial scenes, Paul’s brooding and taciturn demeanor, demonstrated by a raspy voice and sidewise stare, gives you the impression he’s doing his best James Dean, and badly at that. Likewise, his romantic interactions with the film’s female lead flicker but never flame. It’s only when Paul exhibits his gift for implosive emotion that you appreciate his presence here. In the groundbreaking series Breaking Bad, the reverse arc of Paul’s meth-head naïf, Jesse Pinkman, was as compelling as the hell-bound spiral of the tragically misguided Walter White, played with equal intensity by Bryan Cranston. Jesse Pinkman may be a role that comes once in a lifetime, but Paul shouldn’t spin his wheels playing a guy who’s window dressing in a movie with aspirations no greater than triple-digit acceleration. If there is a NFS2, let’s hope Taylor Kitsch is available.

Act of Valor
Navy SEALs conduct a rescue mission in this film that employed actual soldiers and their experiences in its making.