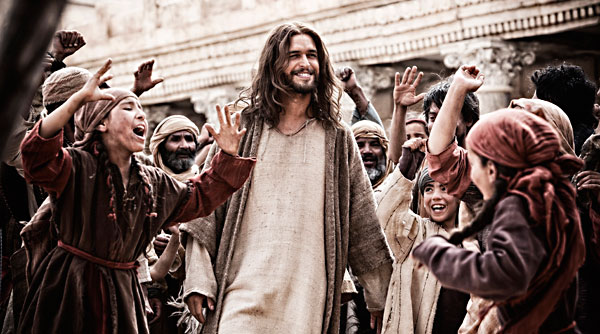 It's not a matter of "what you see is what you get" in Son of God, but instead: You get what you want to see. This is a movie constructed by the viewer because there is nothing else here. A straight-ahead, unimaginative retelling of the life of Jesus (Morgado), edited down from The Bible, a 10-hour History Channel series, this feature film includes all the figure’s signature highlights and revered sayings. The film is a Bible-centric act of faith. There is nothing revisionist nor expansive about it; there is no attempt to integrate the story in a more realistic way; and nothing is ambiguous. This is the son of God, who knows he is the son of God. Almost as soon as we meet Jesus, he is working miracles, and continues to do so through the first half of the film, which details his rising influence as a leader, healer, and powerful religious figure. The second half of the film is darker, and deals with his arrest, trial, beating, and crucifixion, ending with the Resurrection.

Morgado's Christ comes across as though he is posing at a fashion shoot during the first half, and then participating in a beginning acting class during the second. The villains are the Jewish elders who, scared of Jesus and fearing his power, push Pilate (Hicks), a brutal dictator, into killing Jesus – about whom he is largely indifferent.

The film is a rich period piece, but told in endless close-ups. These might have some power on the small screen but on the large one tend to make the already well-known story come across as even more limited. There is little cinematic about the film. Instead, it is a series of figurative illustrations.

Not to be glib but, obviously, believers will feel reaffirmed, and those looking to again enjoy and be enriched by the miraculous life and greatest sacrifice of Jesus will be rewarded. More casual viewers will find themselves glazing over from the obviousness of it all.