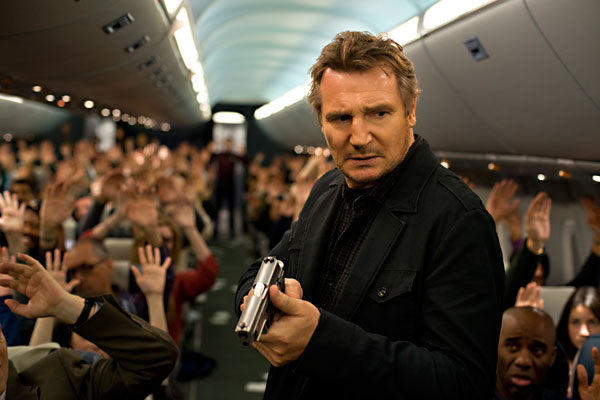 Last year, we had Denzel Washington’s boozing airline pilot in Flight. Now, Non-Stop brings us Liam Neeson as an alcoholic federal air marshal. What’s next? It’s as though Hollywood were trying to turn air travel into a white-knuckle adventure. Fortunately, the future of commercial aviation won’t be harmed by Non-Stop. This new thriller is as toothless as they come.

Again portraying the thinking-man’s action hero, Neeson goes to the well once too often with Non-Stop. Except for the opening and closing sequences, all the activity in this film takes place within the confines of a trans-Atlantic airplane. It must be one of those wide-body jets, because none of the action – nor any of the plane’s 150 passengers – seems the least bit cramped. Even a scuffle that takes place in one of the plane’s lavatories – a tantalizing set-piece – is doomed not only by seeming to be a larger space than it is but also by undistinguished camera shots.

Jaume Collet-Serra, the director of the popular thriller Orphan, previously teamed with Neeson for the film Unknown. More of a problem for Collet-Serra than this new film’s pedestrian camerawork is its screenplay by Ryan Engle, John W. Richardson, and Chris Roach, which piles on the possibilities only to reach a hackneyed conclusion. The best aspect of Non-Stop is its whodunit angle, in which everyone on board the plane is a suspect for Neeson’s Bill Marks, an air marshal who receives a text message once the flight is en route from an untraceable hijacker who wants $150 million deposited into a bank account in exchange for not murdering the people on board.

The film chugs along as Marks takes various measures to uncover the surreptitious hijacker, oftentimes trampling on civil rights along the way. Marks, too, becomes a suspect when he loses the support of his supervisors on the ground. As suspicion shifts from passenger to passenger, the film starts to resemble a parlor-room whodunit, while logic becomes its first fatality. Fasten your seat belts before takeoff, because Non-Stop is a bumpy ride.