Let’s go out on a critical limb, shall we? The Lego Movie is the best thing to come along since that other toy-centric movie revolutionized animated films about 20 years ago. Smart and savvy, it takes the classic dilemma of every Lego owner – to follow the instructions or not to follow? – and constructs a wild-ride fantasy of colorful, interlocking plastic bricks only to deconstruct it in the most amazing way possible. Most animated films deliver their third-act homilies about the value of friendship or the strength of family to the 8-year-olds in the audience seemingly for their parents’ sake; these tacked-on messages of socially redeeming value do little but dilute the cartoony insanity that precedes them. But in The Lego Movie, the tug of war between individuality and conformity is one with the Lego. (The film’s nods to Star Wars and The Matrix are more than just pop-culture asides.) What initially appears to be a nonsensical story about an ordinary minifigure named Emmet, who joins forces with a cadre of Master Builders to save Legokind from the evil Lord Business (who’s plotting to take the snap out of things with Krazy Glue), later resonates with depth and feeling when it segues into the real world of rigid fathers and their imaginative sons. It all fits together seamlessly, in a way you don’t see coming. And all the while, the film is one big advertisement for the multicolored building blocks from which it’s made. The Lego Movie may be the shrewdest marketing ploy you’ve ever seen.

Granted, the animation looks a little scruffy and unpolished, given the inherent imitations of the rectangular elements used to assemble the film. (Emmet and the other minifigures – Batman, Unikitty, Shaquille O’Neal, and Abraham Lincoln, to name a few – aren’t so geometrically restricted; they look more like sophisticated versions of Fisher-Price characters.) But the computer graphics have an endearing, stop-motion quality to them, one that’s a couple of notches above the jerky South Park but several below the digital sleekness of a Pixar flick. (The hilariously awkward movement of the horses in the Wild West section of the film also recalls the claymation poise of Gumby and Pokey.) Even the nonsolid substances in the film – water, dust, smoke, soap lather – are elaborately depicted with Lego pieces, making for some really funky animation sequences. And, of course, there’s nothing better than watching buildings in Legoland explode and crumble into a million pieces … literally. Kudos to the filmmakers for staying true to form, so to speak. More so, kudos to their imaginations for connecting the pieces to make such a funny and sharp animated movie that speaks to kids and adults alike. To quote the favorite song of the once ordinary, now extraordinary Emmet, “Everything is awesome!!!” Indeed, it is. 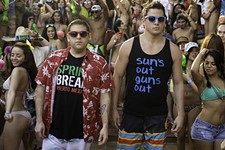