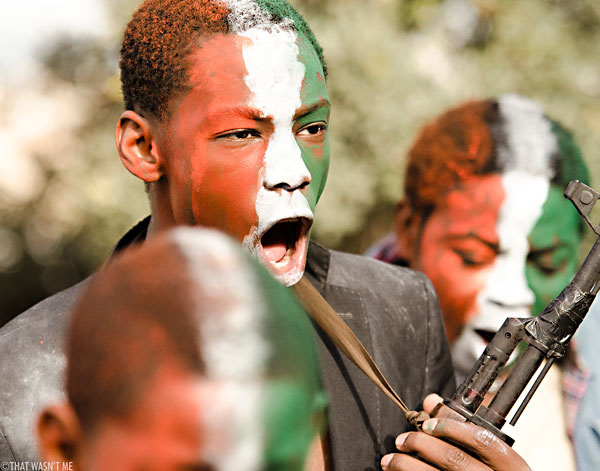 This year’s quintet of Oscar-nominated, live-action short films is, as ever, a mixed bag of issue-oriented filmmaking, whimsical magical realism, dark comedy, and just plain fascinating offerings that straddle the blurred line between playful and deadly serious. Much like short stories, short films are a painstaking and difficult milieu to inhabit. Creatively, they can be the stepping stones to full-length, narrative feature films (see Austin filmmaker Kat Candler’s recent Sundance entry Hellion), or they may remain milestones in the director’s career. All five of this year’s Oscar-nominated live-action short films are worthy of your attention and, thanks to ever-evolving distribution platforms, they’re easier than ever to see and appreciate.

Denmark’s entry, “Helium,” directed by Anders Walter, makes the most of emo Oscar bait with a fantastical deathbed storytime initiated by a hospital janitor (Casper Crump) and an ailing 10-year-old named Alfred (Pelle Falk Krusbæk). The only film in the program that features extensive CGI animation, it draws much of its afterlife imagery from Antoine de Saint-Exupéry’s The Little Prince and Winsor McCay’s early 20th century comic strip Little Nemo. It’s heavy on the heartache but the dreamy zeppelins and overall tone are less morbid than maudlin.

In UK director Mark Gill’s “The Voorman Problem,” Sherlock and Hobbit star Martin Freeman is a psychiatrist interviewing a prisoner (Tom Hollander) who believes himself to be a god. A cagey comic short featuring another utterly believable turn from Freeman, it’s a one-note gag that works perfectly.

From France, director Xavier Legrand’s “Just Before Losing Everything” is a short, sharp, shock of a film in which a battered spouse (Léa Drucker) and her two children attempt to flee the family’s vicious paterfamilias with help from the mother’s supermarket co-workers. Streamlined and intense, with an eerily ambiguous ending, it’s of note that producer Alexandre Gavras is the son of Costa-Gavras (Z). Suspense and social issues run in the family’s veins, apparently.

Spanish entry “That Wasn’t Me” gets the Amnesty International seal of approval for its disturbing examination of an African child soldier and the aid worker (Alejandra Lorente) who suffers a fate worse than death – sort of – by his hands. Director Esteban Crespo displays a deft hand while invoking the brutality of war and its tentacular reach into noncombatants’ lives.

Finally, Finland’s outright farce “Do I Have to Take Care of Everything?” from director Selma Vilhunen, tackles the hilarious attempts of a harried mother (the excellent Joana Haartti) to get her husband and brood ready for a wedding. It may be the lightest fare on this year’s live-action shorts menu, but it’s also entirely charming, goofy, and an upbeat note in an overall darker series of films.