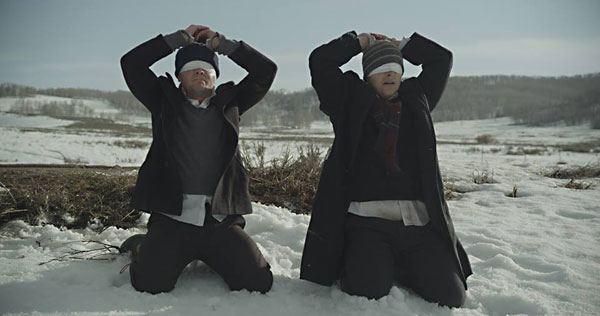 A true story, this oddly compelling film is a visual exercise in claustrophobia constructed around a theme of deeply embraced faith. Two Mormon missionaries in Russia are kidnapped and held for ransom. Grabbed and beaten in an apartment where they have been invited to come proselytize, they are soon hustled off to the countryside. There, in an isolated farmhouse, they are kept handcuffed and chained in a cramped, filthy room.

Straining for cinema verité verisimilitude, the film is told with a constantly jerky handheld camera mostly in tight close-ups with the occasional tight medium shot but with rarely any take more open, relaxed, or relaxing. The story is just as tight: There are the two missionaries, Elder Tuttle (Allred) and Elder Propst (Nelson), and there are their two captors Nikolai (Bogolyubov) and Sergei (Veadov). Sergei is the mastermind of the two – crueler and more dominant – while Nikolai, the missionaries’ constant guardian and caretaker, distantly befriends them.

The film expands to include both sets of parents, the Propsts (Erekson, Newbold) and the Tuttles (Matheson, Mulder), back in the States. Still the shots remain tight, the camerawork jerky and handheld even then. There is a tightness to the whole film.

In ways, it shouldn’t work. There is a dramatic one note to the unfolding story, each of the two hostages almost taking turns going through moments of doubt and uncertainty. Although always these are crises of personal belief and never of faith in the power of the Almighty nor the Church of Latter-day Saints. The depth of their belief in their God and their sense of purpose in following him eventually leads them to a strength, a certain tranquility even in their captivity.

Not the kind of work with which I am often taken, yet in spite of that, I found myself drawn into this emotionally taut tale. Much of this has to do with the excellence of all the actors, especially the four leads who have most of the screen time. The faux verité style is always a bit annoying, especially in the beginning, but damned if it doesn’t finally begin to somewhat get to you. In so many ways the film would be more interesting if it were more ambitious, but on its own terms it is surprisingly strong.