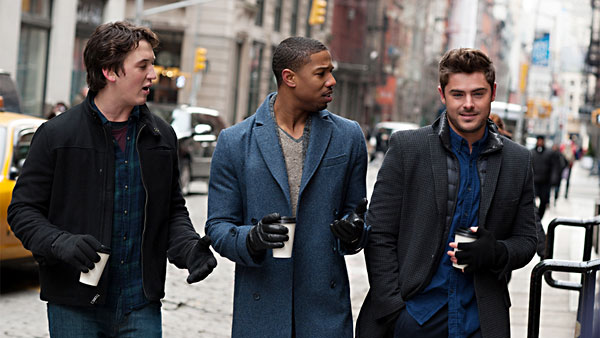 Idiots and assholes. Those aren’t my words. Somebody in That Awkward Moment is forever calling somebody else either an idiot or an asshole. It’s a wonder they all stay friends, even with their bond forged back in college. The viewer, not beholden to any of these idiots and/or assholes, may be quicker to call it quits.

Former teen idol Zac Efron plays Jason, a twentysomething book-jacket illustrator who keeps a steady, ready roster of no-strings hookups. Teller plays Daniel, Jason’s professional partner and first wingman. When the marriage of their other best friend, Mikey (Jordan), breaks up, the trio makes a pact to avoid relationships altogether and enjoy the spoils of being single in New York City.

Efron is still finding himself as an adult actor. He’s certainly charismatic, but here it’s all surface: He delivers every line like he’s hawking cologne, and there’s no demonstrable difference between his early horndog persona and the supposedly reformed guy he becomes by the end of the movie. Teller and Jordan’s performances are more subtle, more dynamic. For the movie’s producers, the real awkward moment must have been the realization that these two rising stars are effectively playing backup to Efron’s boy band.

Some movies famously were found in the editing room (Anhedonia becomes Annie Hall); there’s circumstantial evidence that this movie was lost there. But that’s mere speculation, and maybe too much generosity bestowed on first-time writer/director Tom Gormican – the missteps may have already been there in the shooting script. The three leads’ distinct storylines are metered choppily, there’s an illogic to the scene sequence and plotting, and that initial pact, casually arrived at, is suddenly framed as a game-changing bet late in the film. Most awkwardly, the tone whirligigs between toxic-dude bromides, hard-R slapstick, and earnest swings at romanticism, mostly whiffed. (Idiots and assholes early established are hard to rebrand.) There’s probably a movie out there that can call a happy, anatomical truce between Viagra-hopped, horizontal-dick jokes and heart-on-the-sleeve love stuff, but this ain’t that. 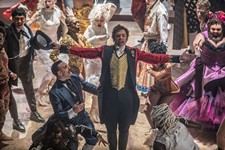