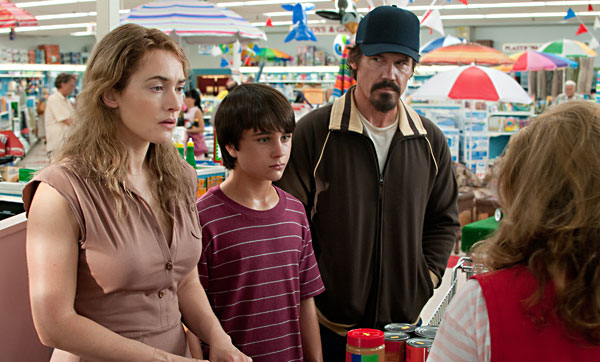 The eerie score establishes the film’s tone from the opening shots. There is something somber and unreal, haunting and off-putting going on with establishing shots of a small rural community set against Rolfe Kent’s score. A voiceover begins to introduce the story. There is an unhappy, reclusive mother, isolated and despairing after having been left by her husband, living with Henry, her son, in a small New Hampshire town. Soon we realize the narrator (Maguire) is the grown Henry. His mother Adele (Winslet) is barely functioning. Early on, she gets in the car, starts it but slips it into neutral. When she can’t understand why it isn’t moving, Henry (Griffith) has to shift the car into reverse.

They are alone and lonely, venturing out into the world only when it is absolutely necessary. On a trip to the store to gather supplies, Henry briefly leaves his mother’s side. Alone, he encounters a stranger who asks for his aid. Henry reluctantly takes him to his mother. At first she tries to decline his request for assistance but is unable. Whether this is through her lack of will or an implied threat by the stranger is purposefully difficult to tell.

They bring him to their home for help. He is wounded and bleeding. Nothing if not honest, Frank (Brolin) explains that he is an escaped prisoner having jumped out of a hospital window after an appendix operation. There is something menacing about him but something appealing, as well. At first, he gently ties Adele up so she can claim that he kidnapped them in case he is caught.

Then swiftly, too swiftly, he begins to integrate into their lives, turning this lost woman and lonely child into a family. Taking on the fatherly role, he does repairs around the house, plays ball with Henry and, eventually – though, again, way too rapidly – romances and wins Adele.

There is every reason in the world this film shouldn’t work. The forced story is set during a metaphor-heavy Labor Day weekend. Events are artificially compressed, emotional relationships that would seem to require much longer periods of time instead develop over just hours, not even days. Still, the film constantly plays against expectations. Reitman’s skilled direction of the superb cast allows the ridiculous to become poetic, the artificial to unfold naturally, the absurd to achieve a deep romantic resonance.

Based on Joyce Maynard’s novel, the film never quite loses its literary affectations. Still, set in the Eighties, the film’s muted colors and small-town setting often make it seem more distant than that – a story out of decades earlier. Lost in time, isolated with so much of the action in one house among three characters, Labor Day lulls the viewer into ignoring its artificiality. The forced narrative drama seems organic. The tortured yet growing familial relations, explanatory flashbacks, and too swiftly moving story shouldn’t really work. Somehow they all do, and the whole is even more than the sum of the parts. Involving, enthralling, and uplifting, cinematically Labor Day doesn’t just transcend its limitations; in the hands of Reitman and the cast, they become strengths. 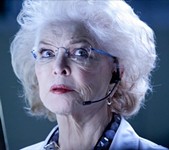 Labor Day TV Programming
Got the day off? Time to work the couch