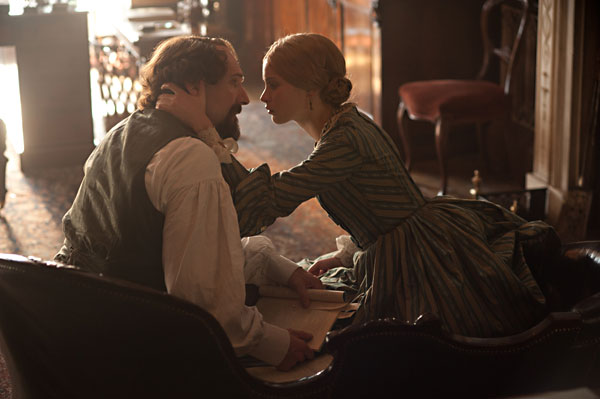 The illicit affairs of famous men (and their resulting progeny) are nothing new. History is replete with the infidelities of monarchs, presidents, authors, and celebrities. Nothing shocks us anymore, except when the public image masks a deceit that borders on the unforgivable. (Think of a former California governor or once-rising star in the Democratic Party, for example.) The sluggishly paced British drama The Invisible Woman depicts the relationship between Charles Dickens and his young mistress, Nelly Ternan, a fledgling stage actress with whom he falls in love despite a 27-year age difference. Initially, the 18-year-old Ternan hesitates to engage in anything but a platonic association with the charismatic Dickens, an unhappily married man with nine children who is the toast of the Victorian Age. She greatly admires him – his extraordinary storytelling talents and unflagging pursuit of social justice remain venerated to this day – but she also knows that any extramarital consummation of their relationship will exile her to a shameful place in society reserved for women (but not men) in such situations. Once she finally yields to Dickens’ ardent pursuit, Ternan necessarily must become invisible to the outside world to protect his reputation as a British national treasure. It’s the subtext of 19th century gender politics that keeps this footnote in Dickens’ life mildly interesting, but it’s a not much upon which to rest an entire movie.

Based on Claire Tomalin’s biography that pieces together this love affair based on diaries, correspondence, and photographs, The Invisible Woman understandably feels cobbled together. Watching it, you feel as if something’s missing, that the film is incomplete. Perhaps a more experienced director than Fiennes might have figured out a way to surmount this narrative challenge. To be fair, he somewhat makes up for this shortcoming in his portrayal of Dickens. On the outside, the genial author is likable and compassionate, a gentleman in every way. But on the inside, you soon see the ego that needs stroking, the desperation of a man growing old, the selfishness of a public figure who believes he’s entitled. Fiennes gives us a subtle glimpse of Dickens’ darkness without judgment. As his paramour, Jones gives a much less interesting performance; it’s as enigmatic as the secreted mistress she portrays. The Invisible Woman might have fared better if it had incorporated more elements of Dickens’ chronicled life into its storyline. In a haunting scene, the distraught novelist walks through the gas-lit alleys of London one night to witness the dirty faces and vacant eyes of the prostitutes, orphans, and drunks inhabiting the city’s recesses. These are the people Dickens championed in Oliver Twist and Little Dorrit, and you can see the sense of helplessness in Fiennes’ face as he navigates this tragic course of humanity. Now that’s a facet of this literary figure’s life upon which to rest an entire movie and more. 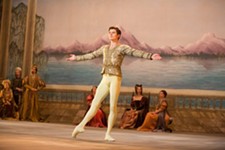 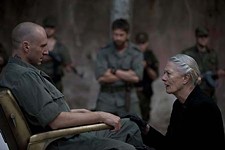