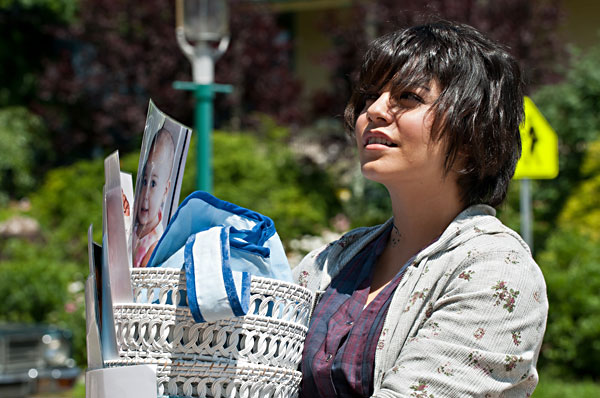 An exercise in very serious and meaningful young-adult drama, Gimme Shelter is so overloaded with simplistic good intentions that are matched with equally bland ambitions that it drowns under its own excesses. It’s not just that this tale is told in the starkest shades of black and white but that it seems more driven by the goal of acting awards than any moral concerns.

Sixteen-year-old Agnes, aka “Apple” Bailey (Hudgens), lives with her abusive mother – an addict played by the usually reliable Dawson, though here she gives a thudding one-note performance of rage that emanates from her ravage and ruin. Escaping from this home, Apple tracks down her successful Wall Street father, Tom Fitzpatrick (Fraser), who lives with his picture-book-perfect family – a gorgeously stylish wife (Szostak) and two children (a boy and a girl, of course) – in his New Jersey mansion. Fraser shows far more range than Dawson by offering two different expressions: frowning, pained concern and hopeful but doomed smiles. Surprisingly, angry young Apple doesn’t fit in with her father’s upscale lifestyle, although in fairness, he tries to make it work. When Apple turns out to be pregnant it proves to be a little too much.

Hudgens is reaching for the acting gold ring here, still fleeing a Walt Disney, child-star background, though with a far more serious effort then her Spring Breakers bad-girl spree. Her Apple is a feral creature, scarred and hurting, scared of life and on the run from her feelings. This is a totally thespian, teary performance that embraces anti-glamor as a style. Notably, in the beginning, there are at least two meal scenes in which she forks her salad with a vengeance usually demonstrated only by psychopathic serial killers stabbing their prey.

On her own and in pain, Apple doesn’t fit in anywhere until she encounters the overly saintly Frank McCarthy (Jones) while recovering in the hospital after a car accident. He leads her to a home presided over by the tough but caring Kathy (Dowd), and populated by a Lost Boys crew of unwed mothers. At first, Apple doesn’t fit in here, but then miracles occur. After the first two acts of unbroken darkness, the ominously threatening clouds break, and the sun begins to shine through. Apple actually smiles for the first time.

Expect most reviews to cite TV afterschool specials because Gimme Shelter is lodged firmly in that country. Yearning to be a tale of familial abuse and social oppression finally overcome by personal triumphant transcendence through community and love, the film is instead the plainest of generic pop songs.