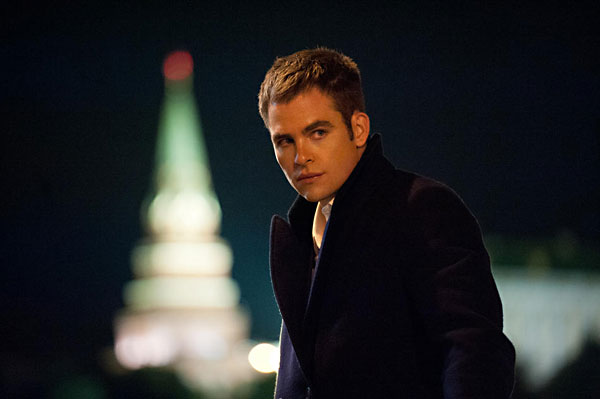 All ticking clocks are not made equal. Corroborating evidence: When Jack Ryan (Pine) warns, “Once I start the audit …” you just might black out from boredom. That’s the kind of countdown only an IRS agent could love. Jack Ryan: Shadow Recruit – yet another reboot of Tom Clancy’s signature creation/cash cow – is the kind of shrugging action movie jury-rigged for a January audience starved for fresh entertainment. (Even so, the film drew middling numbers in its opening weekend.)

Writers Adam Cozad and David Koepp plod through the lengthy opening, which reframes economics whiz Ryan as a post-9/11 enlistee in the Marines, who is eventually tapped to be an analyst for the CIA and work undercover on Wall Street. Because this is not Jack Ryan: Compliance Officer, the film finds a way to get Ryan out from behind the desk and off on assignment in Russia to investigate a hunch about an impending attack.

The first Jack Ryan picture not sourced from a Clancy novel, Shadow Recruit modernizes Ryan’s biography without injecting anything particularly original into the franchise, or into the intelligence genre. A high-stakes motorcycle chase; a control room of analysts barking as they plink away on their computers; an Energizer Bunny-like baddie who won’t stay dead: We’ve seen it before – and better – in the Bond, and Bourne, and Mission: Impossible franchises.

Those films also understand how crucial it is to have tertiary characters who are quick with a quip or possess a quirk or some glimmer of magnetism – they give texture and elevate the generic to the specific. What’s startling about Shadow Recruit is the thinness of its bench. The starting lineup isn’t bad, although they all come with an asterisk. Pine can do “likable everyman hero” in his sleep, but there are few Hollywood leading men with shoulders broad enough to carry two franchises, and he’s better used as the rakish Captain Kirk in the Star Trek reboot. Having arthouse doyenne Knightley gig in a girlfriend part is like the star quarterback suddenly popping down to peewee football, but that’s her choice. Costner, as Ryan’s CIA handler, does his low-key rumply thing – he has a nice bit with a dog – and he’s fine. Director Branagh casts himself as a Russian business magnate moonlighting in economic terrorism, but he’s too controlled to maximize the character’s zealotry. The rest of the cast is indifferently presented and portrayed. You may flinch automatically when one of them is shot, or garroted, but when the filmmakers don’t care enough to give them a single defining trait, why ever would the audience pause to reflect?

Branagh, as a director, is in the midst of a reboot, too, shaking off his heir-to-Olivier mantle to rebrand himself as a big-budget action guy. He fared better with the fun, faux-epic bombast of 2011’s Thor, which dovetailed in its own way with his previous work spoon-feeding Shakespeare to the masses. Shadow Recruit has no such ambitions: Branagh might as well have opened a can and dumped it on a plate, the ridges of a factory-line production still perfectly hatched on a gelatinous cylinder of crud.