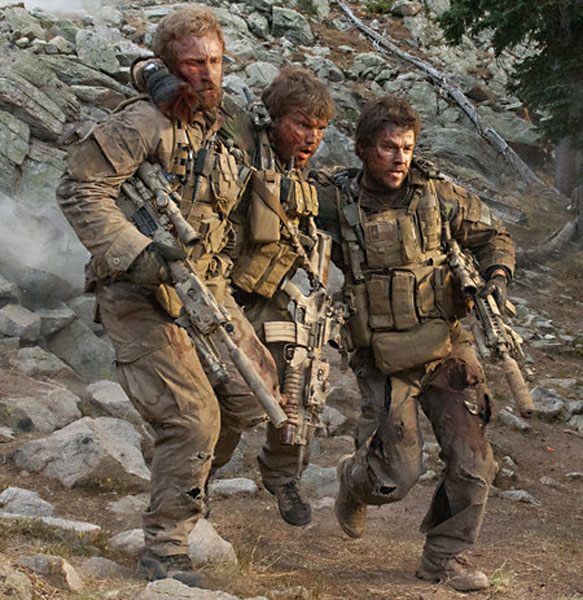 Combat has rarely been depicted in films with the intensity conveyed in Lone Survivor, written and directed by Peter Berg, who here bounces back nicely after the critical and box-office debacle of last year’s Battleship. Apart from the establishing sequences, which show the rigors of Navy SEAL training and a few moments in the barracks, the entire film tracks a military operation that went horribly wrong. The film is based on the book published by the mission’s lone survivor Marcus Luttrell, who is played by Mark Wahlberg. Lone Survivor is a somber celebration of courage and endurance that manages to steer clear of jingoism and moral judgments.

In 2005, in a mission dubbed Operation Red Wings, four members of SEAL Team 10 – accompanying Luttrell are Michael Murphy (Kitsch, who starred in Berg’s ill-fated Battleship), Danny Dietz (Hirsch), and Matt “Axe” Axelson (Foster) – were dropped into northern Afghanistan with the aim of capturing or taking out a particular Taliban leader in the area. Shortly after regrouping in the unwelcoming terrain and eyeing their target, a couple of goat herders – an old man and a boy – accidentally come across the SEAL team while scampering across the rocks with their goats. Immediately, the team faces a moral dilemma: trust that the Afghans won’t report their discovery to the Taliban troops or shoot them in cold blood to protect the mission. Before long, the SEALs are surrounded and vastly outnumbered by armed Taliban fighters, and the rest of the film details their fight for survival.

The assault on the SEALs spares nothing in showing the fragility of the flesh. With their injuries mounting and their chances for escape dwindling, they continue to fight like the fine combat instruments they’ve been trained to be. The barrage of bullets they face (along with their studio-sweetened sound effects) equals the kind of onslaught often seen in mindless video games and shoot-’em-ups. Yet in Lone Survivor we see the consequences of such an onslaught in graphic detail. Few things are as indelible as the sight of these cornered men hurtling themselves over a mountainous precipice, breaking bones, if not spirits, as their bodies make contact with every jagged edge along the way to a landing. It’s nothing like what happens to Wile E. Coyote when he topples over a cliff.

The film also shows how the mission was compromised by faulty communication with the HQ commanders and the unavailability of backup troops. Another 16 American men are lost when the rescue team is shot down by a Taliban rocket launcher. It’s a fluke that anyone survived at all. Without taking sides or glorifying its subjects, Lone Survivor depicts a real band of brothers who put their bodies on the line even as their mission fails.