Theodore Twombly (Phoenix) is depressed. Not the immobilizing kind of depressed: He still gets up every day and goes to work, where he ghostwrites love letters for other people. What Theodore suffers from is more like a prolonged funk, brought on by the breakup of his marriage. You get the feeling he’s not ready to move on. “Play melancholy song,” he instructs his smartphone on the commute home. Dissatisfied with the selection – too suicidal-sounding – he tries again: “Play different melancholy song.” Those are the words of a guy perfectly content to stay cocooned in his wallowing.

Her is set in Los Angeles in the nearish future (Shanghai stood in for some of the exterior shots). Writer/director Spike Jonze doesn’t overdo the futuristic milieu, but you get to thinking about technology – how quickly the newfangled becomes ubiquitous, workaday, then an object of antiquity – before the film even starts: The production company logo flickers like a VHS cassette in need of tracking and the first few notes of the film score (by Arcade Fire) suggest the discordant brrrrang of a dial-up modem.

Early on, Theodore upgrades to a new operating system that signals yet another revolution in technology – the first-ever artificially intelligent OS. Theodore’s OS names itself Samantha, and “it” swiftly becomes a “she” in both Theodore and the audience’s perception. (Samantha is voiced by Scarlett Johansson, cozy but with a kick, like toasted marshmallow and spiked hot chocolate.) At first, the OS functions like a digital life coach, cleaning up Theodore’s hard drive and getting him to meetings on time, but as Samantha sponges up data and experience, she rapidly evolves and tangles with the idea of her own personhood. Also: She and Theodore start dating.

Jonze’s command of the material and the mood smooths that transition, though the tightly confined scope of the film can frustrate. (That an AI and a human might bond feels entirely plausible; that said bond wouldn’t launch a thousand trend pieces, less so.) This is a richly imagined universe – stylishly executed, too – but, as is his right, Jonze elects to explore only a tiny swath of it: the touching banalities of love – every love.

The brilliance of Her lies in how it uses a sci-fi concept to reconstruct the traditional arc of a romance, from getting-to-know-you to growing apart. There are other iterations of that arc, enacted by the gentle Joaquin Phoenix – expert at both open-faced and evasive looks – and three exceptional supporting actresses, Rooney Mara, Amy Adams, and Olivia Wilde; in each of these iterations, Jonze and his actors are sharply attuned to how thinly scabbed old wounds really are. If in previous films Adaptation and Being John Malkovich Jonze seemed a little squirmy about sex, his treatment here is fully adult and keenly sensitive to the complexities of sexual intimacy – how it relates to emotional intimacy, whether or not a flesh-and-blood body is required to achieve it. With Her, he hits a nerve – an age-old one, in fact, dressed up in futuristic trappings – that we’re all still dialing up, searching for a connection. 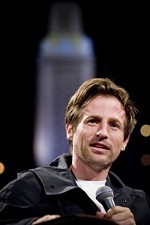 Adaptation.
Adaptation. is a profound natural process by which living things unconsciously mutate over time in order to achieve greater concordance with their surroundings. Adaptation can ...