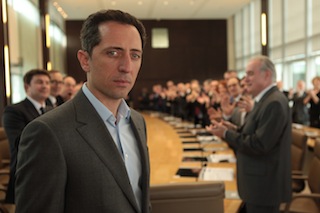 This 2012 film finds the now 80-year-old Costa-Gavras (Z, Missing) as cinematically accomplished as ever. A taut, fast-moving financial thriller, the film begins with the heart attack of the president (Mesguich) of a powerful international bank. The bookish, in-house executive Marc Tourneuil (Elmaleh) is promoted to take his place, the idea being that he will be a pushover. But soon Tourneuil dispels that notion with cold-blooded strategic cunning as he navigates the wildly treacherous waters. Looking out for his own financial interests, he also moves the company forward toward greater profitability. Almost immediately, Tourneuil has to deal with American venture capitalists who own a significant piece of his bank and are scheming to control the rest of it.

In a way, this is same old, same old. The director seems shocked to discover there is gambling going on as he somewhat bitterly indicts capitalism. Yet this stylish, black-comedy take is rich in characters and actions. The somewhat offbeat tone is highlighted as the protagonist imagines actions, while also making asides to the audience.

Still, it never really transcends its Marxist 101 leanings. The opulent decadence – whether upper-class overkill or underground seaminess – is practically wrapped in glossy plastic, mass-produced and prepackaged. The wild card is Tourneuil, who may be a stone-cold villain, a profoundly ironic hero, or simply a two-dimensional metaphor for the dehumanization and ultimate failings of high finance. Amen.
Firebrand filmmaker Costa-Gavras (Missing) turns his lens upon the Holocaust, examining the conditions that allowed the mass exterminations of Jews to continue in virtually full ...