The Secret Life of Walter Mitty

A mild-mannered Life magazine photography editor capable of astonishing feats of derring-do in his dream life, Walter Mitty (Stiller) – in real life – can hardly make eye contact with his lady crush (Wiig) or say boo to his bullying new boss (Scott). Still, the three-act structure demands that even the most indecisive character must come to a crossroads and choose left or right, and so it goes for Walter when he’s tasked to find a missing photo negative that may or may not be located on the other side of the planet. Will the unadventurous man take the leap? Will the quiet man discover his voice? Stiller, who also directs, scores Walter’s fateful call to action to a song by the supergroup Arcade Fire, whose modus operandi is something of a sonic pummel. The Secret Life of Walter Mitty shares the same assaultive tendencies, although Stiller’s method is more like a thousand tiny fists shiatsuing the nerves. It’s relaxing, really.

Based on the 1939 story by James Thurber and adapted by Steve Conrad, this Walter Mitty isn’t about a sad sack, but rather a man haunted by regret. Circumstance turned him timid, and, in the film’s pointedly aspirational messaging, the right circumstances may yet turn him heroic. He gets plenty of practice in elaborately staged daydreams – fighting fires, socking his boss in the jaw – but the light amusement of these early set-pieces is overwhelmed by the sensation of buckets of money and a small army of technicians servicing essentially throwaway gags. (The exception is a low-tech heart-tugger, starring Wiig and an acoustic guitar, that moves the film forward; the other dreamscapes stop it in its tracks.) The Secret Life of Walter Mitty is a very pretty production – pretty colors, pretty scenery, pretty bromides – and a busy one, too, which helps distract us from the sad fact that the movie is generous and humane but not all that interesting.

Could it be the case of a director miscalculating his leading man’s strengths? The actor – lean and wolfish and listing darkly – wears Walter’s hauntedness beautifully. But the director, palpably straining for something epic, troubles an interior drama with so much empty razzle-dazzle. The passion is there; it's only poured in the wrong places. (Opens Wednesday, December 25.) 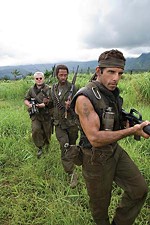 Tropic Thunder
Instead of entering the jungle to find the heart of darkness, Ben Stiller goes in to take aim at the Achilles' heel of Hollywood: its utter pomposity and self-importance.