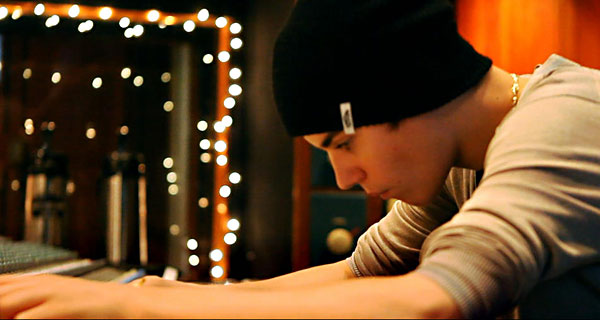 After seeing this film, I feel more inclined to stage an intervention than write a review. But maybe you’re already hip to your need to make some changes in your life. On Tuesday, the day before this film was released on Christmas Day, you sent out a cryptic tweet that said you were “officially retiring.” Yet that was followed by another tweet 40 minutes later assuring your fans that you would never leave them because “being a belieber is a lifestyle.” Dude, it’s that lifestyle that’s causing you trouble. Your music isn’t half-bad (as this film ably demonstrates); there’s no need to retire from the business. But that lifestyle, which has become fodder for tabloid headlines and allowed you to become an international pop idol before you were a fully formed as an adult, is toxic to your system. What you need to do, with all due respect, is grow up.

It’s the rare 19-year-old who’s in a position to commission and co-produce a film about himself. Clearly, with this kind of involvement, we can hardly expect Justin Bieber’s Believe to be an impartial document. This film is just another way to repackage your music and celebrity, couched in the trappings of a holiday gift. Judging from the number of people in the theatre I saw this film in on opening day, it’s not going to be a box-office sensation. But I can guarantee your screen surrogate will be invited to lots of girls’ pajama parties over the next few years.

Obviously, I am not part of the target audience for this film, but I suspect those who are will enjoy it very much. There is a lot of performance footage of you singing and dancing, and the hyperactive stage act (designed by your hand-picked film director, who also helmed your first film) swirls around you in true arena-rock style. There’s also lots of backstage material and testimonies from your Svengali Scooter Braun and other mentors (Usher and will.i.am), musicians and dancers, and, of course, the fans. At one point, black-and-white footage of Beatlemaniac girls screaming their heads off in another era is intercut into your performance footage – just to show, well, I’m not sure what. Maybe that there’s nothing new under the sun, which makes Beliebers seem like nothing more than this season’s fad among adolescent girls. Nevertheless, one sequence which is truly scary is that of the wild sound recorded from the inside of a limo of fans thumping on the limo, refusing to let it pass. This kind of celebrity has got to be overwhelming, especially for someone of your tender years. You give a composed answer when the director lobs you a softball question about how you might avoid becoming a train wreck like other young celebrities. Yet appearances and truth are not the same thing, and the incredible media savvy you’ve developed in a short space of time is only a kind of street smarts and should not be mistaken for wisdom. In the end, seeing is Beliebing.