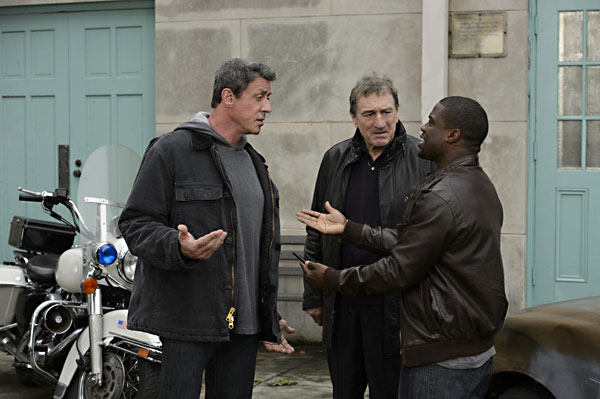 This is a strange, unfunny, and unmoving boxing riff that simultaneously apes the hoary templates of Thirties and Forties fisticuffs films, nails cliches, and telegraphs its eventual outcome at every opportunity. A remarkably uninspired movie overall, Grudge Match is pure pablum melodrama all the way down to the final count. Two veteran actors playing two aging warhorses, both nursing the 30-year-old titular grudge, are brought together to finally vie for the TKO, and the results are deeply dispiriting. You’re probably wondering: “Is it as awful as Clint Eastwood’s 2008 codger drama Gran Torino?” Well, yes, Virginia, and here’s blood in your eye.

Peculiarly timed to a holiday release, I’m at a loss as to what inexplicable niche demographic Grudge Match is going for. It’s clearly not capitalizing on the success of geezer bloodbaths such as The Expendables franchise, and it’s a distant cry from blood-and-thunder classics like Robert Rossen’s Body and Soul and Michael Curtiz’s Kid Galahad. Instead, the pitch seems to have been more along the lines of “Raging Bull meets Rocky, but they’re totally old, out-of-it dudes with family, alcohol, and cash-flow issues.” It probably made sense on paper, but on the screen it merely conjures the ghosts of the once whippet-fit De Niro and the ever abdominal Stallone. Pathos is ladled on with all the subtlety of a sledgehammer to the cranium, and Tim Kelleher’s script is as painfully punch-drunk as they come.

The vastly superior Grumpy Old Men (with Jack Lemmon and Walter Matthau) mined relatively similar emotional and aging issues with infinitely more aplomb, wit, and wisdom. Grudge Match merely made me want to watch De Niro’s Scorsesean rage (and spittle) fly once more in Raging Bull, or for that matter, Stallone’s underdog Rocky (a man with very few options) holler out for his true love Adrian. Grudge Match yells a lot and maniacally yanks at the heartstrings like a buzzard ripping out soft tissue, but even the in-ring battle choreography is abysmal. It’s all pretty depressing, to be truthful, and even Basinger, as Stallone’s long-ago love interest, is wooden, inert, and looks like she’s mentally counting to 10 in every scene, waiting for the whole mess to be over. (Opens Wednesday, December 25.) 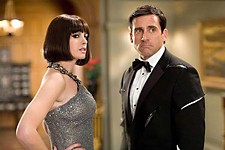 Get Smart
A giggly summer movie, Get Smart is a well-cast chip off the old block, although the toothless action sequences detract from the comedy.