A truly ambitious, nicely animated prehistoric romp, this film features a stunning disconnect between cinematic mise-en-scène and narrative content. The press material insists, “For the first time in movie history, audiences will truly see and feel what it was like when dinosaurs ruled the Earth. Walking with Dinosaurs is the ultimate immersive, big screen adventure for families. Meet dinosaurs more real than you’ve ever seen …” – that is, until the voiceovers begin and the story unfolds.

Yes, the film evidences a sincere and deep effort toward the creation of dinosaur portrayals and accurate geographic and environmental settings. Unfortunately, all the sophisticated energy used to create some kind of tangible verisimilitude is squandered on a plot that seems yanked from of one of those horrific Disney nature films from the Fifties. Corny and obvious would be compliments to this film’s script.

The story of an outcast young dinosaur, the runt of the litter, who falls in love while slowly growing to manhood, is maddeningly predictable and beyond hackneyed. The misadventures he suffers are children’s-coloring-book obvious; the overall narrative trajectory contains no surprises. The film is narrated by a beautifully colored bird, Alex (Leguizamo) in an inexplicably thick Hispanic accent combining story narration with lame jokes and tossed-off observations. One critic, not all that unkindly, compared this characterization to Jar Jar Binks. It is the worst of what is a complete catalog of awful voiceovers.

Obviously, I’m not even close to the intended audience for this film, but it was maddening and frustrating to watch so much ambition wasted on delivering such lame junk. Very young children, I suspect, will like it, but the closer viewers are to puberty, the less likely it is to hold their interest. 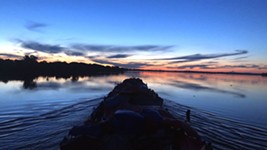