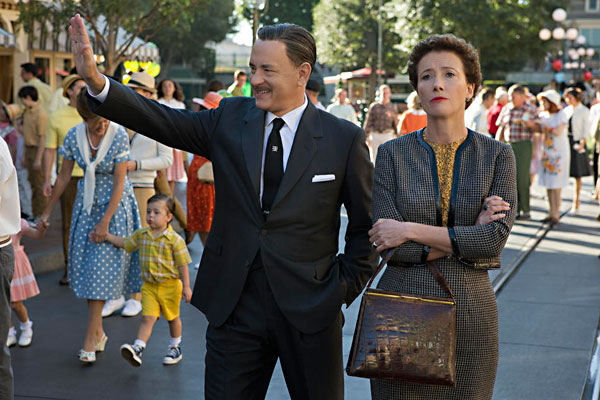 In Saving Mr. Banks, British author P.L. Travers (Thompson) resists the efforts of Walt Disney (Hanks) to sanitize her beloved literary creation, Mary Poppins, on film with the same conviction as the no-nonsense nanny who was carried by the east wind to the Banks family household and into the imaginations of young readers the world over. Singing chimney sweeps? Ghastly! Animated penguins? Never! Dick Van Dyke? Oh, the horror! The battle of wills re-enacted in this love letter to everything Disney takes place over a fortnight in 1961 during the stateside preproduction of the film musical, with the studio team bending over backward to convince Travers to give them the screen rights to the character. Her face scrunched in stubborn resolve, the author refuses to compromise on the tiniest of details. She’s a walking wet blanket who disdains California sunshine and Mickey Mouse, a misanthrope in the Happiest Place on Earth. It seems Uncle Walt has finally met his match, that is, until he does his homework and unravels the Electra complex troubling his reluctant collaborator.

The armchair psychology in Saving Mr. Banks is fairly crude but never treacly. In a series of clunky flashbacks depicting Travers’ childhood in the Australian outback, the film reveals her difficult relationship with her father, who – like the patriarch Mr. Banks in Mary Poppins – is an unhappy man toiling in the banking profession. But the similarities between fact and fiction stop there. Saving Mr. Banks postulates that Travers’ resistance to the Disneyfication of the Banks family and the nanny who rescues them stems from a lifetime of guilt over the untimely death of her father, a charming but irresponsible man who struggled with the demons of alcoholism. It’s dark stuff for the Magic Kingdom, but no worries. In a stroke of sneaky genius, the film turns the determined Disney into a tough-love father figure who consoles the beaten-down Travers with an interminable homily about assuaging life’s painful memories. It’s a hogwash justification for the Disney philosophy of filmmaking, but as delivered by the consummate pro Hanks, you find yourself halfway believing it.

The saving quality here is Thompson’s performance as the prickly Travers. Even when the script requires her to disparagingly comment on some aspect of American culture every three minutes (as if the jokes are programmed with a timer), there’s something undeniably pleasurable in watching this sorely missed actress take charge. But as Travers’ brittleness slowly gives way to vulnerability, Thompson is in full bloom. She falters only in one scene, through no fault of her own. In a rehearsal rendition of “Let’s Go Fly a Kite,” the last musical number in Mary Poppins that’s sung by a reinvigorated Mr. Banks, Travers finally succumbs to the enterprise and before you know it – she’s tapping her feet, singing, and dancing! It’s the film’s long-anticipated moment, and you don’t believe a minute of it. It’s a bitter pill to swallow, one that all the sugar in the world can’t help go down.