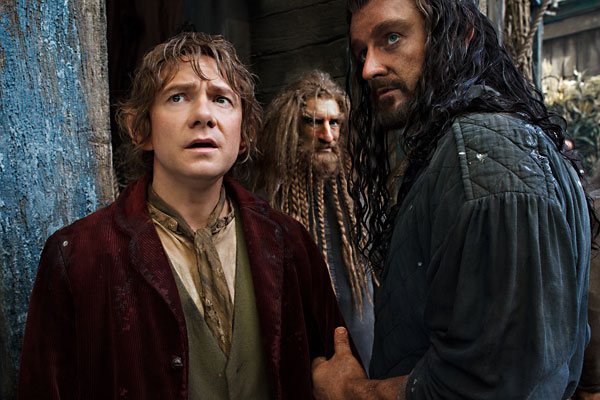 The Hobbit: The Desolation of Smaug

Superior in nearly all ways to its predecessor, this second of Peter Jackson’s epic adaptations of J.R.R. Tolkien’s not-nearly-as-massive prequel to The Lord of the Rings trilogy is a welcome surprise. I’d been dreading another two to three hours of chanting dwarves, puzzled-sweet Bilbo Baggins (Freeman), and the director’s oft-smothering mother love for the 48 frames-per-second technical trickery and 3-D, but The Desolation of Smaug chuffs along at a steady, if still overly lengthy, stride, thanks in all ways to the titular dragon-of-all-dragons, Smaug the, um, great and terrible. Granted, the scaly marvel doesn’t present himself until the final third of the film, but as voiced by Benedict Cumberbatch, the nail-gnawing reveal is worth the wait – and then some.

I’m not even going to attempt to capsulize Jackson and co-writers Fran Walsh, Philippa Boyens, and Guillermo del Toro’s jam-packed plotting; you either know what’s going on going in, or you don’t. But among the film’s many high points are the additions of the Woodland Elves – and, in particular, the enchantingly rough-and-tumble Tauriel (Lilly) – and, oh yes, the giant spiders. What’s not to love? Well, the 161-minute running time, for one thing. Jackson, like Smaug, has developed a bad habit of piling on the shiny stuff to the point where, at times, you feel downright over-awed. There’s so much going on – Ian McKellen’s Gandalf is off on his own quest now, the dwarves accompanying burglar Bilbo are prone to more infighting than the NBA, and the ugly mugs of the Orcs come in wave after wave – that it’s easy to lose sight of the fact that, at its heart, this is a relatively simple quest tale. (I’m unsure what Joseph Campbell would make of all the bells and whistles and severed Orc noggins that Jackson has added to Tolkien’s original mix.)

Still, The Desolation of Smaug is, on the whole, a vast improvement over The Hobbit: An Unexpected Journey. It’s a popcorn movie (in the best sense) disguised as deep-core nerdism. Of course, the nerds (and, as someone who spent most of sixth grade reading Tolkien and Frank Herbert, I proudly count myself among them) will be ecstatic over Jackson’s fealty to his source, but the rest of the audience will tremble with dread at the shifty spell of Smaug as well. Well done, Mr. Jackson.