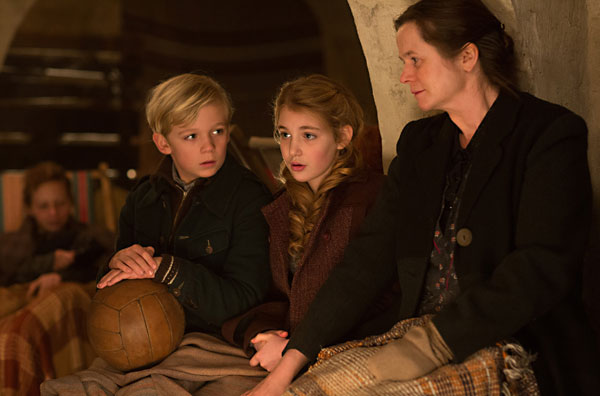 In 2005, Aussie author Markus Zusak’s staggeringly popular and critically lauded The Book Thief spent four-and-a-half years on The New York Times Best Seller list. No mean feat for an ostensibly Young Adult novel relating an intimate tale of one plucky young girl’s coming of age-cum-survival quest amid the apocalyptic insanity of Nazi Germany. Moreover, she’s minus a longbow, a scholarship to Hogwarts, or the ability to read. And she’s an orphan to boot.

It’s 1938 in a small village outside of Munich, when 11-year-old Liesel Meminger (Néllisse) is shipped off to live with her proxy parents, an older German couple: kindly, compassionate WWI veteran Hans Hubermann (Rush) and his dour wife Rosa (Watson). There’s mention of Liesel’s birth parents having ties to the Communist Party, hence the bloodline subterfuge, but in the context of Zusak’s adaptation, it’s barely relevant; in her adopted hamlet, Liesel is “the other” by any other name. Kristallnacht arrives while Hans, a flagging optimist with a cynic’s eyes, teaches our heroine to read and write, thus freeing her from at least one aspect of the mounting horrors. At some point, a scruffily handsome Jewish boxer, Max (Ben Schnetzer) arrives and is secreted away in the basement, and Liesel and her adolescent paramour Rudy (Liersch, wonderfully cast) join the Hitler Youth. The book burnings give our newly minted bibliophile pause, but the source novel’s greatest strength – I’m midway through it as I write this – lies in its depiction of cataclysmic geopolitical events seen almost exclusively through the eyes of an adolescent female. (There’s a narrator, too, straight out of a Terry Pratchett book, but ’nuff said on that.)

Zusak’s film, as scripted by Michael Petroni, chucks out the novel’s crisp, occasionally sublime storytelling in favor of huge swaths of maudlin melodrama and countless cloying wartime cliches, all of them set to John Williams’ broodily obvious score. On the not-much-of-a-plus side, at over two hours long, sitting through The Book Thief engenders in the viewer some serious sympathy for the interminable plight of poor, sickly Max, concealed below stairs in a dank, dark corner of the house on Himmelstrasse. Heaven this is assuredly not, and like him, you squirm in your seat, waiting for the torture to end. 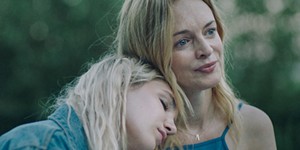