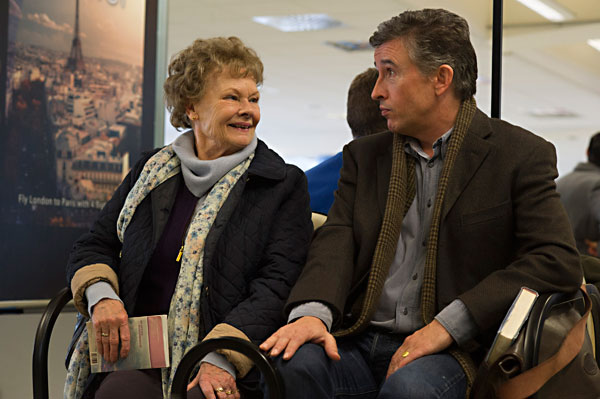 It’s nice to see Stephen Frears – the director of High Fidelity, The Queen, and The Grifters back on firmer dramatic ground with Philomena, following the general disappointment that greeted his recent features like Tamara Drewe and Chéri. Philomena’s pleasures derive mostly from the study in contrasts between the film’s two central characters, who are played by Judi Dench and Steve Coogan (who also co-wrote the screenplay with Jeff Pope and has a producing credit on the movie). There’s enormous pleasure to be had from watching these two pros playing characters engaged in the same quest but coming at it from dissimilarly arsenic-and-old-lace personalities.

The story is based on a memoir by Martin Sixsmith, a former BBC journalist turned political spin doctor, who, as the film begins, has just fallen on his sword and been axed from his government job because of a verbal indiscretion. Flailing about while looking for his next venture, Martin (Coogan) quickly realizes that no publisher will be interested in his proposed study of an obscure aspect of Russian history. Although he declaims human-interest stories as a repugnant form of journalism, he stumbles into a juicy story and finds a newspaper eager to foot the bill for his research (which includes, among other things, a trip to the States and hotel stays). Accompanying him every step of the way is Philomena Lee (Dench), who wants to learn what happened to the son she gave birth to in a convent 50 years ago and who was taken from her when he was still a toddler.

What unfolds is a story about the practices of the Magdalene Laundries, which, under the auspices of the Catholic Church, took in “fallen women” and then forced them to work for their board in a form of indentured servitude and sold their babies to grateful adoptive parents. Martin, of course, is a world-class cynic who only finds the information to be fuel for his atheism, while Philomena, despite her experiences, remains a faithful believer in Catholicism. More prominent than religion, however, are Martin and Philomena’s differences in class and breeding. World-weary Martin regards Philomena as a rube, due to such things as her delight at finding a mint left on her hotel pillow and a plush robe in the closet, and her steady diet of romance novels. They definitely make for an odd pair, although they remain united through their circuitous search for answers to the mystery of what became of Philomena’s son. For the viewer, however, solving this mystery is not nearly as engrossing as watching the actors’ pas de deux.