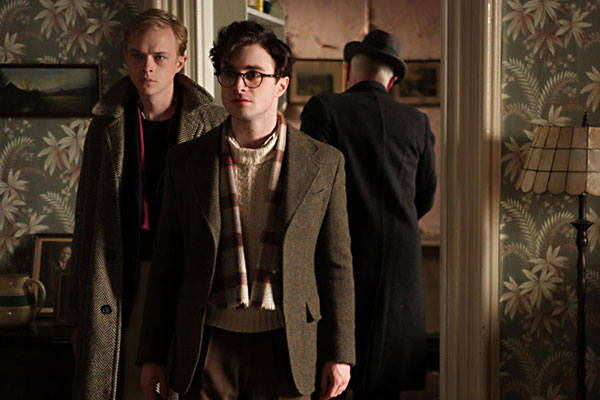 ”First thought, best thought,” is the maxim a young, aspiring poet by the name of Allen Ginsberg bandies about throughout this sweet and sour biopic about the collegiate years of the best and the Beatest. This may not be the first film about the Beats, but it’s certainly one of the best-acted and least mournful. It captures the fizzy frisson of the new, before it became socking; It’s a gas, a hoot, and a tragedy all in one.

As played by former boy-wizard Radcliffe, Ginsberg is a naif on the edge of a knife, the closeted shy boy from Jersey who, once accepted into the churning, hedonistic whirligig of Columbia University in the mid-Forties, falls in with a raw lot of mad, bad, and potentially dangerous-to-know types and emerges from the experience howling. That he finds camaraderie and love amongst the likes of David Kammerer (Hall), William S. Burroughs (Foster, whose uncanny impersonation of the famed deranger of the senses merits either a Best Supporting Oscar nomination or a gap year spent on a quiet beach somewhere), a peripatetic Jack Kerouac (Huston), and maddest of all, Lucien Carr (DeHaan) – an angelic blonde with more than a streak of the devil in him – forestalls any notion of a “normal” university run. Rough trade, indeed.

The film’s title is a hoary literary maxim itself, referring to the often painful editorial process. In the context of the storyline (co-scripted by director Krokidas and Austin Bunn), it’s all too apt for these increasingly dilated pupils. Krokidas swerves all over the place – fittingly, given his subjects – but resists the temptation to dive full-on into Burroughs’ then-nascent notion (by way of Brion Gysin) of the cut-up technique (much, one assumes, to film editor Brian A. Kates’ relief). There’s even a terrifically farcical sequence in which Carr and company break into Columbia’s hallowed library under cover of nightfall and restock its library with copies of Lady Chatterley’s Lover and Henry Miller’s Tropic of Cancer (booting out the Gutenberg Bible in the process). It’s like some Twilight Zone riff on National Lampoon’s Animal House.

The cast is uniformly excellent. Huston catches a pre-On the Road Kerouac acting appropriately Kerouacian, while an almost unrecognizable Jennifer Jason Leigh and what could only be a David Cross cameo, adroitly, are the mentally unbalanced Ma and Pa Ginsberg.

Kill Your Darlings is a love story more than it is a history lesson, albeit one that declaims the likes of Baudelaire, Rimbaud, and Whitman over rose-tinted sentimentalists like, say, E.E. Cummings and Hallmark. The film’s love for its subjects is mirrored in their passionate frenzy for words, and language – spoken, written, body – in general. Above all, and what sets it apart from other cinematic takes on the Beatified, is how much fun it is. It may end in tears, but then, don’t all great love stories? 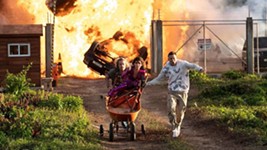