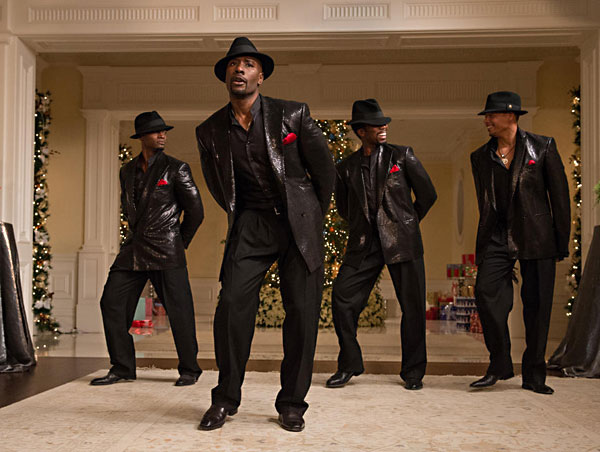 If you were paying close enough attention to the Roots’ track that opened 1999’s twentysomethings comedy The Best Man, you heard the whole plot distilled in just under five minutes: A guy turns the secret of a one-night stand with his best friend’s girl into the barely fictionalized fodder for his first novel, which happens to be debuting on the eve of his still-clueless best friend’s wedding. (Fourteen-year-old spoiler: It all works out in the end.) To acclimate audiences this time around, the sequel opens by replaying clips from the first film, which are assembled with the kind of corny digital effects you’d expect on a family home video distributed at Christmas and scored to a forgettable R&B song. It’s all thumpingly on-the-nose, favoring the literal over the lyrical and boasting none of the sexy, “kick in a snare” boost of the Roots’ long-ago opening missive. But in its very dowdiness, it is on point with this sequel’s shifting priorities: Welcome to middle age, friends.

That isn’t to say the returning cast doesn’t make 40 look damn good; may we all age with so little weathering. But writer/director Malcolm D. Lee is admirably candid about what a big fat lie that 14-year-old spoiler is: It didn’t actually all work out in the end. Everybody got older. Friends drifted apart. Husbands and wives regularly go to bed angry. Sometimes it’s desperately hard to get pregnant, and sometimes you end up with a baby you don’t want. There is never enough money, ever.

So where do we find these old college pals? One-time best man Harper (Diggs) isn’t having any luck selling his latest novel, and his wife Robyn (Lathan) is having a difficult pregnancy. Money woes plague the highly strung Julian (Perrineau), too; he’s having trouble finding donors for the private school he operates with his former-stripper-turned-wife Candace (Hall). For others, lasting love has proved elusive: Jordan (Long) now runs a major cable news network, but won’t allow herself to be vulnerable in a relationship; Julian’s ex, the imperious Shelby (De Sousa), has mined a career out of being a divorcée (in the film’s first of many laughs, she’s revealed to be the star of The Real Housewives of Westchester); while the ganja-powered Quentin (Howard) is enthusiastically enjoying professional bachelordom. That leaves NFL star Lance (Chestnut) and wife Mia (Calhoun), who survived the revelation of Mia’s tiny lapse in fidelity – and Lance’s massive history of stepping out – to successfully make it to the altar in The Best Man; 15 years later, they’ve invited their friends to stay for Christmas.

Lee plays his audience exceptionally well. High spirits mark the first half of the film; quite simply, these guys are just fun to be around – most especially Howard, all half-lidded, cat-who-got-the-cream coolness. Then a well-telegraphed plot turn steers us into nose-honking, sleeve-sogging weepie country, and it is marvelous. It’s no mean feat, stitching together comic bonhomie and Kleenex-wadding melodrama, but Lee makes it look easy. And even, yes, a little sexy. Take that, middle age.