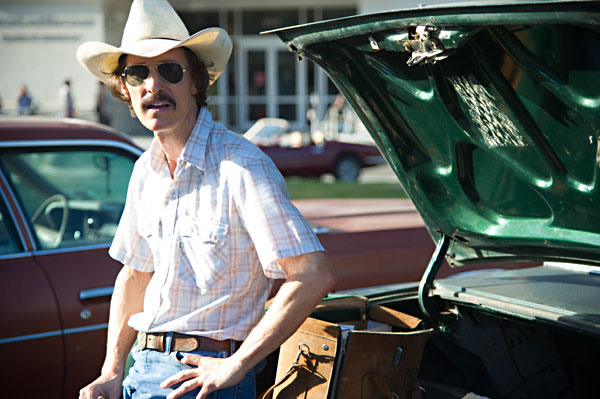 Matthew McConaughey’s career resurrection is in full bloom in Dallas Buyers Club. His acting career, which started in the Nineties with McConaughey’s standout performance in Dazed and Confused and graduated to a full-on star treatment for his leading role in A Time to Kill, got waylaid over the next decade with a continuing series of wan romantic comedies. Over the last two years, however, McConaughey’s choice of roles has demonstrated a renewed vigor and interest in the course of his career. Beginning with The Lincoln Lawyer in 2011, the actor appears to have rededicated himself to his craft, turning in fine and varied performances in Bernie, Killer Joe, Magic Mike, The Paperboy, and this year’s excellent Mud. Even though he will probably never completely shed his reputation as Austin’s naked bongo boy (and why should he?), McConaughey is now spoken of as a viable contender for Oscar nominations this year due to his work in Mud and Dallas Buyers Club. And before the year is out, he will also be seen in Martin Scorsese’s The Wolf of Wall Street.

Unjustly or not, losing or gaining great amounts of weight for a role tends to be regarded as a sign of great acting. And if that is the case, McConaughey’s turn in Dallas Buyers Club can definitely be considered great acting. For this role as the gaunt, Texas good ol’ boy Ron Woodroof, McConaughey is said to have lost 40 pounds. Based on true events, Woodroof is an electrician and rodeo rat, who is first glimpsed in 1985 screwing two women while watching the bull-riding through the slats in the fence. A card-playing, substance-abusing, sexist, and homophobic jerk, Woodroof, at the outset, is far from an appealing character.

When an accident on the job knocks him unconscious, he wakes up in the hospital and is told by the doctors (Garner and O’Hare) that routine blood work has revealed that he is HIV positive and that he has only a month to live. Predictably, the diagnosis is met with anger and denial by Woodroof, but gradually his survival instinct kicks in. He proves to be an uncooperative patient, however, and finds it easier to cadge pilfered AZT from an orderly. In an underwritten role, Garner plays a doctor who concurs that the AZT dosages used in their trial are probably too strong. Woodroof finds his way to Mexico, where an unlicensed American doctor (Dunne) fortifies him with a cocktail of vitamins and drugs. Thus begins Woodroof’s transformation from goner to survivor, and from homophobe to rough-edged humanist. Soon he is smuggling the Mexican drugs across the border and seizes on the idea of a buyers club to redistribute the drugs to other Texans in need.

Woodroof’s transformation is the heart of Dallas Buyers Club and though it’s largely unsentimental, it is also a little less than completely convincing. Woodroof’s partner in this business is a transgender person named Rayon (Leto), a streetwalking, drug-addicted, T-Rex fan who provides Woodroof with an entry into the gay community. Leto’s stellar performance is only slightly undercut by the stereotyping of the character. The film’s portrait of the early days of the AIDS crisis is interesting, especially since it’s been such an absent subject in feature films. Yet there is a sense in Dallas Buyers Club that we are witnessing an individual story about personal growth and the kind of resilient determination that might be applied to other suffering characters in any disease-of-the-week movie. Dallas Buyers Club is not really a movie about the dawn of the epidemic, the transformation of the gay community, or a dozen other topical issues relevant to the period. However, Dallas Buyers Club is an indelible story about one man’s unwillingness to go gently into that good night, and the personal growth he experiences along the way. 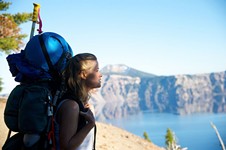 Wild
Reese Witherspoon stars as Cheryl Strayed in this autobiographical trek of expiation.