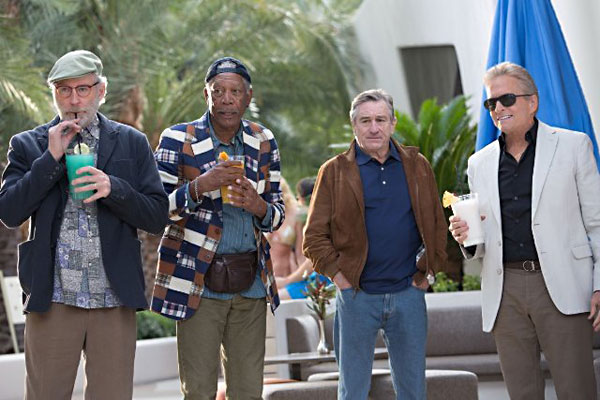 Although Last Vegas apparently aspires to be The Hangover for the Social Security set, there are fewer nutso antics than seen in The Hangover series and more concentration on character dynamics. In Last Vegas, four sixtysomething pals who’ve been friends since childhood reunite for a weekend in Vegas after the last remaining bachelor in their clan pops the question to his girlfriend (who’s half his age) while in the middle of delivering a eulogy for a departed friend.

Billy (Douglas) is that Malibu, Calif., bachelor who’s about to embark on this surefire marriage. His confederates in this party weekend include Archie (Freeman), whose grown children keep him confined to a sedate life within his house after having suffered a stroke; Sam (Kline), who has grown bored with his life of early Florida retirement; and Paddy (De Niro), who has to be coaxed into the Vegas trip because he is still mad at Billy for not attending his beloved wife’s funeral – a festering issue that takes on new dimensions over the course of the weekend.

It’s delightful to see these acting pros hamming it up in this movie. They look as though they’re having a blast. The same can’t be said for the audience. The script by Dan Fogelman (Crazy, Stupid, Love., The Guilt Trip) is as formulaic and predictable as they come. You can envision most of the jokes and plot developments well before they arrive. One surprise, however, is Steenburgen as a smooth-voiced lounge singer who can hold her own with this bunch. Another is a cameo by rapper 50 Cent. On the whole, however, Last Vegas is mindless fluff lent some extra weight by these acting powerhouses. 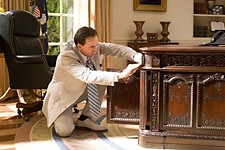 National Treasure: Book of Secrets
Nicolas Cage is again on the prowl in this sequel to the 2004 smash success.