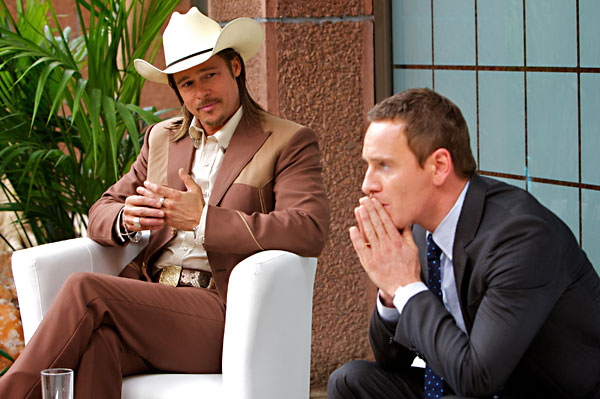 The snaky fingers of the Juarez drug cartels feature prominently in not only last month’s Fantastic Fest documentary favorite Narco Cultura but also Ridley Scott’s newest, which is as serpentine and slick as you’d expect from Scott, but also boasts the screenwriting debut of Texas’ literary dirty-deeds godhead Cormac McCarthy. The Pulitzer Prize-winning McCarthy, at 80, has penned an unsettling anti-noir with surrealist comic tinges. There’s nary a nighttime sequence in the whole film apart from one memorable moment of motorcycle carnage, but The Counselor nevertheless exudes a miasma of dirt-dry menace from its first scene, which finds Fassbender’s morally pliable El Paso attorney writhing under the sheets with his newfound inamorata (Cruz). Scott layers the pretitle sequence with a doomy eroticism that ends up saturating the entire film.

McCarthy’s storyline whipsaws back and forth between Fassbender’s counselor, who, teetering on a fiscal cliff of his own making, buys into a shady drug deal with the tragically coiffed, dangerously oblivious, Texan kingpin Reiner (Bardem); louche middleman Westray (Pitt, deftly answering the question: “Whatever happened to his breakout character J.D. in Scott’s Thelma & Louise?); and fatalist femme Malkina (Diaz). Awful acts and some seriously fine cinematography from Dariusz Wolski ensue.

Fassbender, though, gets the kudos (again) as the man who has everything but loses it all – thanks partly to a slyly cast Bruno Ganz (Wings of Desire) and, more important, to the character’s moral compass that points wherever he feels it should, until, of course, it points due south of heaven.