After three successful feature films, the documentary stunt-mélange formula of the Jackass gang has been tidied up for this fourth film with a whisper of a plot. It’s not so much of a plot that it gets in the way of the dumb pranks but, for the most part, the jackassery is gentler and less life-threatening.

Johnny Knoxville is truly unrecognizable under tons of makeup and prosthetics as the movie’s titular octogenarian, Irving Zisman, who’s been tasked with driving his grandson Billy (Jackson Nicoll) cross-country for delivery to the boy’s deadbeat dad. Using hidden-camera lensing in the style of Borat and Bruno, Bad Grandpa has the duo inflict their stunts on unsuspecting populaces from Lincoln, Neb., to Raleigh, N.C. Most of the gags hinge on the shock expressed by their innocent foils when presented with the kind of scatological jokes and dick humor that they don’t expect from an old guy and an 8-year-old kid. Only one stunt involves anything as dangerous as hurtling oneself through a plate-glass window. These exchanges have a softer edge than Sacha Baron Cohen’s hidden-camera work, however, which is more likely to expose bigotry and small-mindedness than Jackass’ pure astonishment.

In fact, an almost sweet sensibility emerges by the end of Bad Grandpa. Young Jackson Nicholl is a real find: The kid can really hold his own against Knoxville’s master pranker. Despite its thin narrative thread, the film moves from set-piece to set-piece as Irving and Billy drive from city to city. Some of the jokes are flat-out hilarious, but most are overworked or tepid. Predictably, some of the funniest stuff is contained in outtake footage shown in the film’s closing moments, as well as the Bad Grandpa 1.5 bonus discs that are bound to be available any minute. The question is: How many servings of Irving are you good for? 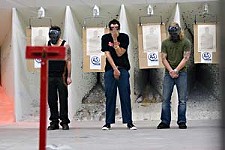