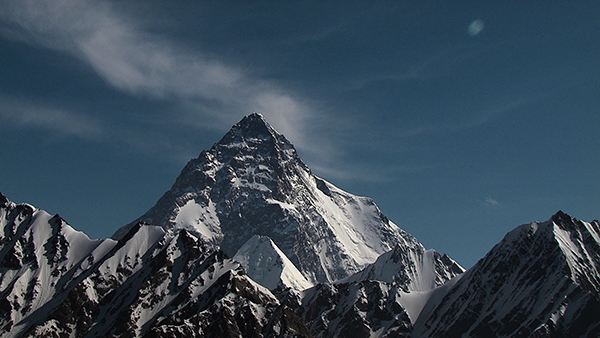 Like the catastrophe it documents, Nick Ryan’s harrowing accounting of what caused 11 climbers – out of a makeshift team of 24 – to perish on the infamously treacherous Himalayan peak K2 over the course of two days in August 2008 is dismayingly snowblind. The questions it seeks to answer contain more than a few ultimate unknowables, making this a flawed investigation of one of the worst mountaineering disasters of all time. It still works as a cautionary tale of man vs. nature hubris, but the endgame finger-pointing among survivors, their families, and one amazing Nepalese sherpa leaves the viewer frustrated. What’s plain to see, however, is that summiting K2 is, as one climber puts it, a game of “Russian roulette.” Except this time, despite the “perfect” weather, K2 was fully loaded.

Ryan’s footage includes a wealth of actual material – some of it horrifying – taken by the American, Serbian, South Korean, Pakistani, and Italian teams – and it serves as the narrative backbone to the unraveling of the ascent. Plagued by rock slides, an ice fall that severed the climbers’ descent lines, snow blindness, and, above all, an alarmingly cavalier attitude toward timing, planning, and grievous bodily harm, this band of professional climbers enters the 8,000-meter-high “death zone” and tragically suffers massive loss of life on the descent. (Serbian climber Dren Mandic perished on the ascent, which might make viewers wonder why his fellow mountaineers didn’t stop and turn around then.)

Unlike Kevin Macdonald’s superior film Touching the Void and author/adventurer Jon Krakauer’s 1997 bestseller Into Thin Air: A Personal Account of the Mt. Everest Disaster, Ryan’s film further confuses an already disorganized tale by playing with the timeline, inserting talking-head interviews with the decedents’ friends and family, and generally keeping you wondering what’s happening to whom, and when, and where. A more linear narrative (if such a thing were possible, and it’s not totally apparent that it was) would have imparted a more powerful sense of urgency to the documentary. It’s still a hellish glimpse into one of climbing’s worst days ever, and there’s no way to resolve the unresolvable, but as it is The Summit, like K2 itself, remains an icily beautiful and altogether deadly mystery.