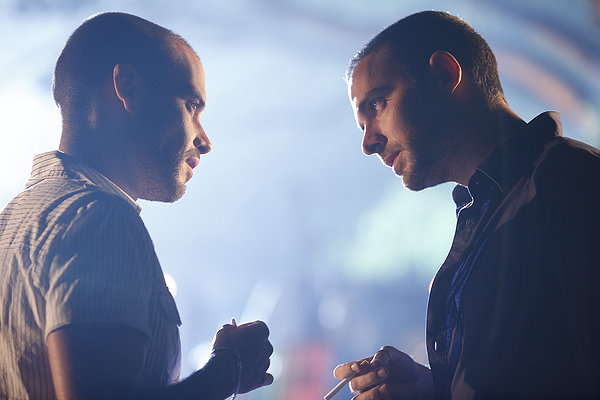 Colombia’s mid-Nineties drug trade, during which time the country produced 80% of the world’s cocaine, provides the milieu for The Snitch Cartel. The film, which was Colombia’s submission for last year’s foreign-language Oscar race, is a fast-paced action drama that’s based on an autobiographical book by Andrés López and a hit Colombian TV series. Although stylishly filmed and edited, the film’s derivation from more extensive narrative forms shows in the surfeit of detail regarding the internecine cartel battles which, minus much character definition, can make the viewer’s head spin.

The story follows the rise of young drug dealers Martin (Colombian heartthrob Manolo Cardona) and his best friend Pepe (Diego Cadavid), who break from the Cali cartel and join the North Valley cartel during one of the systemwide shakeups. Their innovation is to cut out the Mexican middlemen and ship their goods directly to Miami and beyond. The film falls for most of the Scarface cliches about riches, babes, and bling, without adding anything new or original. Martin is a little different from the other men, however, in his devotion to one woman, Sofia (Juana Acosta), whom he has loved since childhood. Yet Sofia has no character traits, unless you regard stunning beauty as a trait. Even less developed is the character Martin calls the other important woman in his life, his grandmother (who is played by the great Mexican actress Adriana Barraza, and has even less to do than Sofia).

Perhaps viewers of the TV show will find more depth in The Snitch Cartel than newcomers to the drama. But without character definition, the film feels like a constant swish pan from one violent event to the next.