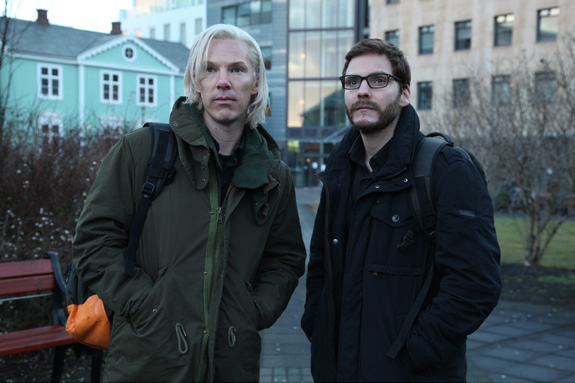 Telling the WikiLeaks story is obviously quite complicated and requires huge narrative skills and ambitions. In many ways, this film makes a valiant and comprehensive effort to not only get at the story, but also at the many intellectual issues it raises, while especially concentrating on the characters who drive it. The main idea behind the WikiLeaks website is that by making hidden and suppressed information available – unedited – the workings of business and government will be exposed to the public, uncensored and unfiltered.

There is a lot of flash and stylistic bravado here as the film explodes all over the screen and combines dazzling uses of cinema with a driving soundtrack. Much of it is conveyed in flashing bits and dashes, real news reports emphasized by these style bombs – which often makes it hard to follow exactly what is going on.

The website’s founder and visionary Julian Assange (Cumberbatch) recruits computer/interactive genius Daniel Domscheit-Berg (Brühl) to join his new venture. Without any real funds and pretending to have an army of reporters, fact checkers, and technicians they don’t have, they manage to break a number of important international stories that garner much attention and a serious, if not always supportive, following. The early days are heady and exciting as they combine journalistic derring-do with innovative and creative use of emerging media in a kind of multilayered spy story that is draped in what are very nearly science-fiction affectations. Still, the film seems to grow smaller rather than larger as it builds toward WikiLeaks’ most notable achievement: the acquiring and releasing of several libraries of American classified documents.

Ultimately, the story becomes one of personalities, which seems inevitable but narrows the accomplishments and ambitions of its focus. Assange’s personality and actions, at least according to this movie, force the story into a form that resembles a classic tragedy in which the flawed protagonist dooms the adventure.

There are many things going for this film, notably its narrative and cinematic verve. Most striking are the stunning performances by the two leads, both of whom are emerging as great talents of their generation. Cumberbatch’s work in Star Trek Into Darkness and the BBC’s Sherlock and Brühl’s performance in Rush are career-making. This film just furthers the gifts and promise of these talents. Still, the film finally falls short, an explosive beginning leading to a pedestrian end.