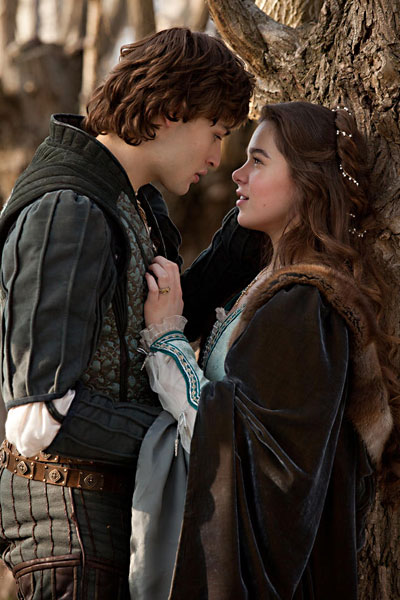 I know this thing’s been kicking almost half a millennium, but is it too much to ask for a little invention? West Side Story goosed Romeo and Juliet with grand jetés. Baz Luhrmann gave us Glocks and the Queen Mab soliloquy on Ecstasy. Hell, even Franco Zeffirelli’s relatively sedate 1968 adaptation had the distinction of introducing generations of high school boys to their first eyeful of boobies.

So what fresh meat does this 2013 rehash bring to the table? Startlingly little, unless you favor the flavor of staggering insipidness. (Okay, there’s also an off-book joust and the sniggering narrative fillip that Romeo – sensitive soul, he – is a stone chiseler; we first meet him toiling at a monument to Rosaline.) Going “straight” in period garb and with more or less fidelity to the source, director Carlo Carlei and adapter Julian Fellowes (of Downton Abbey) deliver a Downy-fresh take on the original, with actors cast, it seems, more for their moist eyes and kissable mouths than for any especial emotive quality.

A blank-faced Douglas Booth plays Romeo (the chiseler!) and the age-appropriate 16-year-old Hailee Steinfeld (True Grit) is his Juliet. They’re nice enough to look at, but it’s a love affair built on trading lines and light pawing, not the full-bodied “violent delights” of Shakespeare’s play. The supporting cast doesn’t make much of a dent, either, save the contributions of Lesley Manville (Another Year) as Juliet’s affectionately pecking nurse, and Paul Giamatti as Friar Laurence. Giamatti especially knows how to work his mouth around the language to make it impactful – conversational, even. Shakespeare sings like his native tongue, when so many of the younger performers sound like they’ve learned by phonetics.

You can arguably cut around a limp performance, but the direction is one long misfire. You wouldn’t expect open derision from the arthouse-friendly, older-leaning audience at the Arbor, but I heard more than a few guffaws at a matinee screening. There are the counterintuitive moves: That iconic Queen Mab speech, for example, is ruined by a faux-arty infatuation with shadow and candlelight. And then there is that which may be charitably filed under the Hammy Directive: Carlei attempts a motif with hands – pulling apart, clasping in death – that is risible, and a fantasy sequence actually involves the two lovers riding off into the sunset on horseback. The film finds some momentum once the bodies start dropping – but maybe that was only the sweet relief in knowing the end was nigh. Casper
At its best, which is when it's exploiting both its eye-popping special effects and delicious production design (the interior of the haunted mansion is truly ...