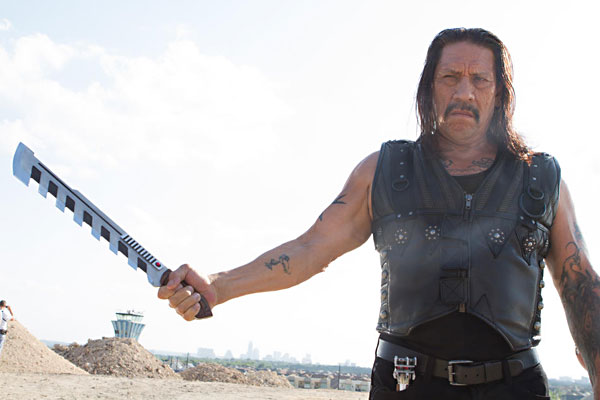 Danny Trejo returns as the scowly, deadpan, musclebound master of edged weapons in this unruly, occasionally silly, but ultimately grindhouse-fun sequel to Robert Rodriguez’s 2010 actioner Machete (which itself is based on a faux, 90-second trailer in the Rodriguez/Tarantino doubleheader Grindhouse from 2007). Think of it as a homage to some of the wilder Chuck Jones Looney Tunes of the Forties and Fifties – with a lot more leg and enough comically outrageous gore to satisfy even the most die-hard fan of Rodriguez’s increasingly crimson output. Just don’t expect a classic of American independent cinema.

This time out, the former Mexican federale is called to duty by the president of the United States (Charlie Sheen, billed under his given name Carlos Estevez) to kill the insane Mexican revolutionary Mendez (Bichir). For that selfless act toward U.S. national security, Machete Cortez will receive a full presidential pardon for prior bloodbaths and, as a bonus, U.S. citizenship. The only things standing in his way are a bevy of bullet-laden, brassiere-blasting babes, Mel Gibson’s Voz (seemingly a psychotic riff on Space-X founder Elon Musk), and Lady Gaga. Yikes.

Machete Kills’ plotting takes on the manic, over-the-top chaos of the aforementioned Warner Bros. ’toons almost immediately and its storyline is something of a convoluted mess. That said, it works extremely well as a drunken, date-night midnighter or film-fest entry, all madcap bloodletting and surrealist non sequiturs. Whether or not audiences will embrace the chaos as they did with Rodriguez’s original Machete outing is still up in the air (and probably dangling from a helicopter as steel-jacketed ordnance whizzes by). Still and all, it’s another grimy/sexy slice of a 42nd Street throwback, and viewers of grindhouse cinema aren’t exactly known for their pickiness when it comes to mad, bad, dangerous, and frenzied filmmaking. Knock back a couple of tallboys or smoke that doobie, get yourself a bucket of popcorn, and just roll with it. This is the sort of film midnight was made for.