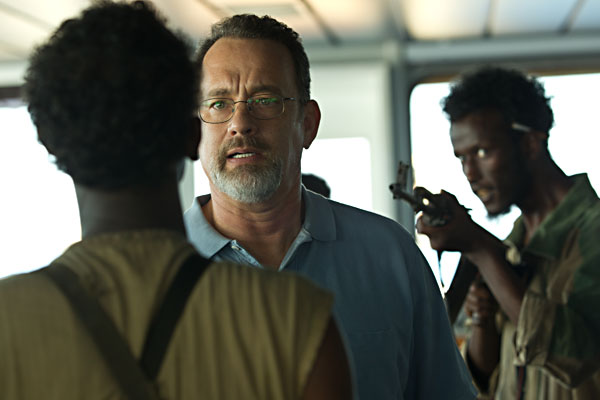 Captain Phillips ventures out to high seas and takes the audience along for a tense, claustrophobic ride. Based on true events from 2009 in which the U.S.-flagged cargo ship Maersk Alabama was captured for ransom by Somali pirates, the film also draws from Captain Richard Phillips’ recounting of the experience in his book A Captain’s Duty: Somali Pirates, Navy SEALs, and Dangerous Days at Sea. Although Phillips – played by Tom Hanks in a commanding, Oscar-courting turn – remains the heart of the film story, the script by Billy Ray (Shattered Glass) and direction by Paul Greengrass (today’s go-to guy for political thrillers) never loses sight of all the event’s participants as cogs in a greater social machinery. Phillips’ merchant marine crew follows protocols, the pirates are mere henchmen for powers with bigger guns and greater wealth, and the Navy SEALs perform their deeds at the behest of the US. government, which determined that the American hostage not be taken ashore to Somalia. The characters are largely one-dimensional instruments, though the situation in which they all find themselves is multidimensional.

Greengrass, the Brit director who perfected his documentary realism in films such as Bloody Sunday and United 93, shows that he’s refined his craft even further by his time spent in Hollywood directing Bourne thrillers. Re-teaming with his Green Zone cinematographer Barry Ackroyd, Greengrass creates a kinetic showcase that whizzes by, yet never loses track of the disparate elements. The first half of the film, which is mostly devoted to the invasion and defense of the Maersk Alabama, is carefully constructed so that all the maneuvers in the pirates’ skiffs and the multiple levels of the container ship are a study in spatial comprehensibility and multifaceted storytelling. Once the action moves to the confines of the lifeboat into which are stuffed Capt. Phillips and four young, scared pirates (whose khat-chewing makes them behave ever more erratically) the film becomes almost unbearably claustrophobic. Richard Phillips attempts one escape, but he is not a self-sacrificing hero. A no-nonsense leader, Phillips is not even a beloved figure by his crew, who respect him but nonetheless find him a cold martinet. (Indeed, I would have been thankful for a captain who was real flesh and blood, instead of an amusement-park vamp like Capt. Jack Sparrow or a cartoon superhero like Captain America, the spectrum covered by most movie captains these days.) With Captain Phillips we get a viable thriller whose conclusion is already known, and a character who reacts to circumstances rather than a personal, heroic code. And now, it’s a story preserved in brine.