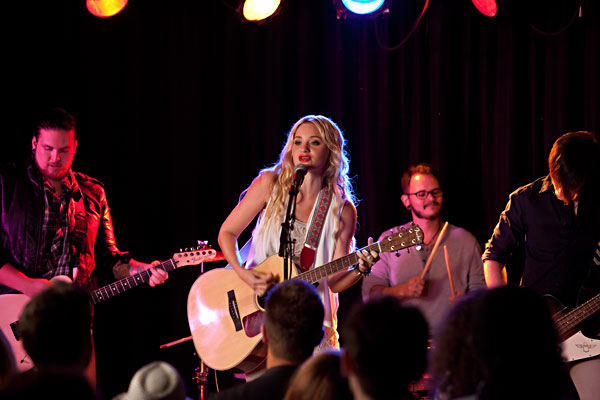 In this niche-targeted film, Grace (Michalka) is in a successful Christian music group with Johnny Trey, her father (Denton). She has a beautiful, powerful voice, and also plays guitar and piano. Unfortunately, she is in regular conflict with her father over the direction of their music, which she would like to open up to rock a little more. Mostly, she is a model daughter but this conflict begins to extend into lifestyle when she skips youth group for a movie.

Years ago, Trey was a one-hit star who let his life slide to hell because of drugs and alcohol. Christ not only saved him, but Christian music became his calling. Mossy (Pollak), his old manager, shows up and reveals that Trey’s old song has become a Web hit, and now there is interest from a major label in the former pop star. Trey is not interested in returning to the old ways, but Grace records the song herself, and sends it to Mossy. He is impressed enough to play it for the record company president, who likes what he hears.

Secretly, Grace flies to L.A., and is groomed for pop stardom. There are many scenes involving the usual star-making machinery, as well as romantic/seduction subplots. Ultimately, Grace must face the question of who she really is.

Moralistic and predictable, the film is still charming and well made. The music isn’t terribly exciting but it isn’t complete pablum either. The often-performed hit song is acceptable power-pop. Mostly, the film survives on fine performances from all, except father Trey who is a little too intense and over the top.

Don’t suspect any surprises: It is a Christian film and demonstrates melodramatic TV strategies. Still, on its own terms it is entertaining.