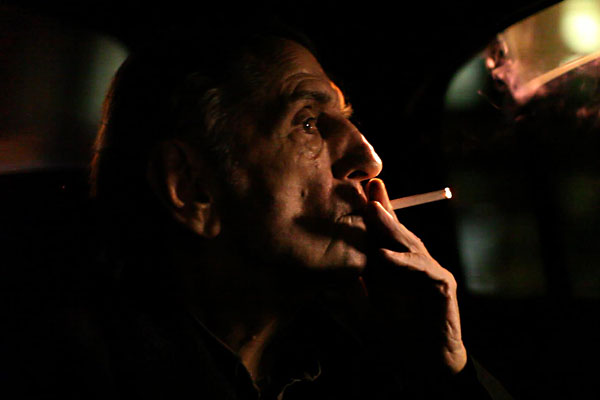 You may not recognize his name, but his hardscrabble, hangdog visage is a beautiful and mesmerizing pockmark on the visual history of cinema. Harry Dean Stanton: actor, mystic, lover of women, and ultimately enigma in extremis, is instantly recognizable from his culty breakout performances in Alex Cox’s Repo Man, Wim Wenders’ Paris, Texas and, earlier, in Monte Hellman’s Two-Lane Blacktop and Stuart Rosenberg’s Cool Hand Luke. He plays Nostromo crew member Brett in Alien (“… Jonesy?”) and Lyle in David Lynch’s The Straight Story. And always he remains a taciturn character, slightly outside the action at hand, generally placid but prone to sporadic outbursts of violence and gray-sky emotionalism. He was, and is, the coolest living actor on the planet. (And you can quote me on that.)

”The life of a repo man is always intense,” Stanton remarks, in character as the speed-snorting and cynical Bud in Cox’s film, but Huber’s documentary is intense in a completely different vein. This is not a proper documentary, but a lyrical ode to an actor who has lived his life utterly on his own terms, for better and for worse. Friends and fans, directors and stars – David Lynch, Sam Shepard, Deborah Harry, Kris Kristofferson – add a few notes of reminiscence to the film, but it’s Stanton himself who is the enigmatic and contemplative Zen master of his own history. “Who are you?” asks Huber. “Nothing, nobody, there is no self,” the now 87-year-old replies.

Alternating between color footage and the genius interplay of startlingly lovely sequences of Stanton singing and playing harmonica in granular black-and-white, Harry Dean Stanton: Partly Fiction perfectly captures the essence of the man. Richard Linklater has said that there once was a god who walked the Earth named Warren Oates. I would suggest a second, companionable deity: Harry Dean – partly fiction, all too human. Blue Note Records: Beyond the Notes
History of the avant-garde jazz pioneers is surprisingly lacking in innovation