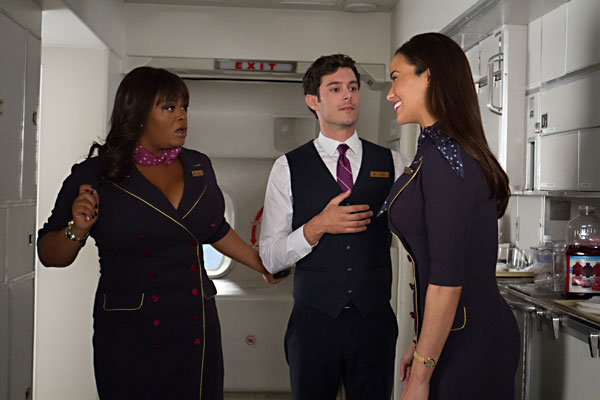 This rom-com about a desperate-to-wed flight attendant never achieves liftoff. The story is based on writer/director David E. Talbert’s own novel, but instead of a comfortable familiarity, the film yields only cliches. His paint-by-numbers production clunks where it should froth and does his leading lady Paula Patton no favors. Really, how hard can it be to find Mr. Right when a guy named Mr. Wright (Luke) lives right next door?

Montana Moore (Patton) is a 30-year-old flight attendant who goes into a panic when her younger sister (London) announces her engagement. Because of this and the constant pressure from her five-times-married mother (Lewis), Montana vows to find herself an eligible bachelor by the time of the wedding in 30 days. Her flight-attendant pals – cleavage-baring Gail (Scott) and limp-wristed Sam (Brody) – concoct a harebrained plan to track the flight itineraries of all Montana’s ex-boyfriends and then send her scurrying past TSA checkpoints in an effort to accidentally-on-purpose run into these prior rejects in the hope that they have changed into husband material. Meanwhile, back at home William Wright is always there to pick up the pieces.

A parade of handsome black men with deal-breaking flaws (Diggs, Hounsou, Kodjoe, and Neverson – aka Trey Songz) sweep in and out of the narrative. Patton receives little helpful direction in developing Montana into a full-blooded character as she suffers one disappointment after the next. She lobs one good joke about black Republicans, but otherwise is left to her own devices, and her grab bag of acting tools has nothing that can help her find her bearings. Although there’s a strong likability quotient for everyone onscreen here, which ought to keep the movie minimally afloat among its target audience of black viewers starved for a new Tyler Perry offering, Baggage Claim should be left behind at the carousel.