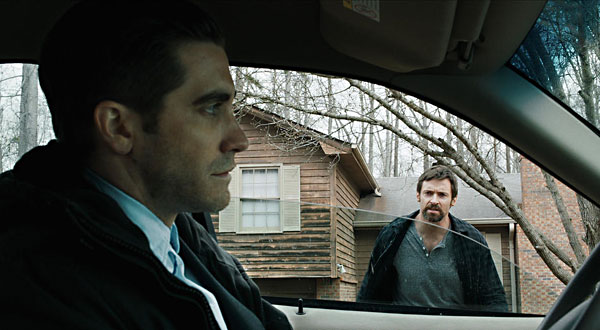 With this, his English language debut, Québécois director and Oscar nominee (Incendies) Villeneuve proves there's still a little wiggle room in popcorn block-busted Hollywood to make a dark, brooding, uplifting downer of a film along the lines of Mystic River, David Fincher's Zodiac, and Gone Baby Gone. Those are just three examples of the type of morose American-mosaic film Villeneuve has crafted. Prisoners is a bleak police procedural stoked by the fires of obsession and regret. It's a rough, gritty ride, but one well worth taking, despite its morally benighted alleyways and myriad red herrings that are often more than what they appear to be. It's a kick in the pants to Hollywood's weaker efforts, such as Taken, and it deserves to be seen in the theatre.

It's Thanksgiving in suburban Pennsylvania when two little girls go missing. Jackman is riveting as Keller Dover, a tightly wound, deeply religious, and apocalyptically inclined survivalist father of 6-year-old Anna. Bello, as his wife Grace, is less prone to the creeping, religiously tinged paranoia, but utterly believable in her shroud of shattered normalcy.

Also missing is 7-year-old Joy, the daughter of next-door neighbors Franklin and Nancy Birch (Howard and Davis). Gyllenhaal is the twitchy, blinking Detective Loki, who is called in to investigate, and Dano plays a mysterious RV-driving drifter who has mental health issues and is quickly nabbed as the obvious suspect. But, as in the aformentioned Zodiac (which also starred Gyllenhaal), few things are what they at first seem.

Apart from Roger Deakins' virulently depressing cinematography – and I mean that as a compliment – Prisoners benefits immensely from its intricate, puzzle-box scripting by Aaron Guzikowski. As the mental torture caused by the girls’ disappearance shifts into grim and potentially unstable actions, including torture, the film stutters all over the human moral compass, rarely if ever landing on true north. It's a veritable shoo-in for an Oscar nod this year, and one of the more disturbing films to come out of a major studio in ages.