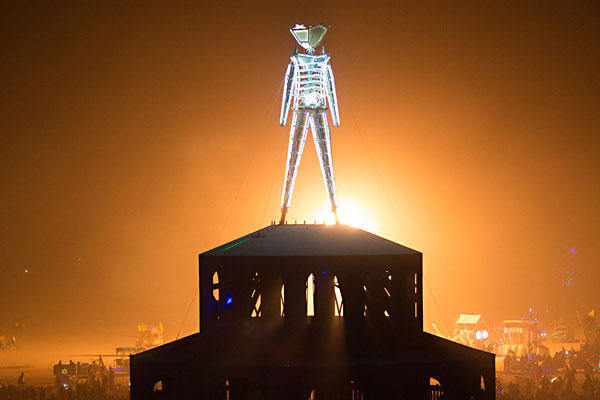 In case you’ve been living in Kansas for the past 20 years, Burning Man is a weeklong annual “exercise in radical self-reliance,” held in Nevada’s Black Rock Desert, a few hours’ drive outside of Reno. I’ve twice attended, back in the Nineties and in 2000. While “the burn” can be overwhelming for newcomers, it’s a testament to how many people come away from the event with the feeling of having their lives and, indeed, their psyches, hearts, and pretty much every synapse in their noodles changed on a fundamental level, for the better. Art and nonviolent anarchy can do that to you.

Spark is far from the first documentary to attempt to catch the octarine light in a bottle that is the essence of Burning Man. If you count shaky YouTube and Vimeo minidocs, there are probably thousands of the things by now, which seems fitting. The party line runs something like, “If you’ve never been there, you’ll never understand it, and if you have been there, you’ll never forget it.”

I completely concur. How to describe this transcendental, whirling-dervish-of-nonstop-art party and nearly nude bacchanalia that appears, as if by magic, in the middle of one of the most inhospitable places on Earth? (The endlessly flat Black Rock playa, with its gray alkaline dust that tends to turn up in the most intimate of places weeks after you’ve returned home and showered 20 times is one thing, but the downright biblical sandstorms that roll through occasionally can be downright savage.)

Spark, however, is the best of the lot when it comes to attempting to grok the burn and the burners. Co-executive-produced by Chris Weitz (Twilight: New Moon) and helmed by veteran documentarian Jessie Deeter and newcomer Steve Brown, the film goes beyond the usual “Wow! Naked people on a flame-spitting centipede!” gawkery and deep into a core group of artists, visionaries, and longtime allies, while also focusing on the more personal stories of, for instance, Otto Von Danger, a disenchanted former Marine who plans to erect a nearly full-scale re-creation of Wall Street with the express intent of blowing the whole thing to pieces. (How Wall Street will feel about this is anyone’s guess.)

Seemingly, the crew was given carte blanche to film anything and everything, and John Behrens’ electrifying cinematography actually does manage to capture more than a little of this gorgeous storm of creativity and hope. Certainly the looping, swooping aerial shots help the viewer grasp the sheer immensity – 60,000 attendees at Burning Man 2012, the event pictured here – of the controlled chaos. Still, the truism holds: If you’ve never been, you really ought to go already.