It’s a tale of two masters that can’t be told without footnotes or what-might-have-been frustration, and the book hasn’t closed on it, not by a long shot. The facts: The internationally acclaimed filmmaker Wong Kar-Wai made a movie about the legendary martial-arts practitioner and teacher Ip Man (or Yip Man). Wong released a 130-minute domestic cut in China, where it was a huge hit, then sheared 10 minutes or so off that version for the film’s world premiere as the opening night film at the Berlinale in February. The film now arrives in American theatres, courtesy of distributor The Weinstein Company, which is helmed by Harvey Weinstein, famously nicknamed “Harvey Scissorhands” for his perceived overappetite for hacking down running times. The U.S. cut, which Wong endorses, runs a slim 108 minutes, and has by all accounts been reshaped for American audiences, who, by and large, don’t have the same foreknowledge of Ip Man, or martial arts, as Asian audiences do.

Those are the facts, more or less; what follows is the helpless frustration of the American viewer, who may absorb a version that circles both torpor and transcendence, but not know – not now, at least – if that film’s deficiencies are preexisting or the fault of a deleterious scissoring. (Worth noting: No one walked out of 2007’s featherweight My Blueberry Nights, Wong’s last feature film and his first English-language one, feeling the cine-master was working on solid ground.) So what of the movie now showing stateside? For this diehard Wong fan, it plays like an ambitious and anomalous entry in the canon – occasionally breath-catching, but never body-and-soul engrossing like so many of his other works. In short: a disappointment.

Wong has tackled period films before, sensuously evoking the Sixties in Days of Being Wild, In the Mood for Love, and 2046, and this isn’t his first martial arts picture, either (Ashes of Time was a wuxia epic, both the original 1994 cut and 2008’s Redux). But The Grandmaster is his first go at real-life biography, and it doesn’t feel like a natural fit – the traditional biopic’s streamlined, A-to-Z arc and Wong’s more impressionist ethos. He’s typically more show than tell, but The Grandmaster – charting a largely chronological course and plodgy with pedantic title cards that rehash what the attentive viewer has already gleaned – is heavy with the telling.

It’s a helluva story, to be sure, opening with Ip Man (played by Wong regular Tony Leung Chiu Wai, seemingly ageless, endlessly placid-smiled) at his ascension in the 1930s as a leading light of the Wing Chun fighting style in the Southern provinces, who is tapped to challenge the North for martial-arts supremacy. After Ip Man and the retiring Northern grandmaster dally, the latter’s daughter, Gong Er (the tiny, potent Zhang Ziyi), challenges Ip to an honor match, and the two parry and thrust in a magnetic pas de deux that will spark a chaste bond that carries them through a decade marked by war, vendetta, ruin, and redemption.

The tale is not so easily relayed. The Second Sino-Japanese War goes by in a blur, though its betrayals and gutting losses will steer the course of the film. Characters are introduced, only to drop off the radar abruptly. And a seeming aside, prefaced by an ungainly “did I ever the tell you the story …,” marks the film’s high point, in an extended montage that chronicles Gong Er’s efforts to reclaim her father’s 64 Hands martial-arts legacy from a usurper.

A whole movie in miniature, this snow-swept stretch is a perfect synthesis of action choreography (set alongside a whizzing train), personal stakes, and Wong’s signature, so-seductive high-emotions aesthetic. It doesn’t get much better than this – and frankly it leaves Ip Man’s story in the dust – but in this cut, at least, it’s but a blip in an otherwise staid, even unsure film. 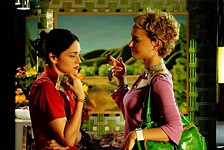 My Blueberry Nights
Filmmaker Wong Kar-wai's English-language debut stars the singer Norah Jones in her acting debut, but instead of exuding newness this sensuous film has an also-ran feel.