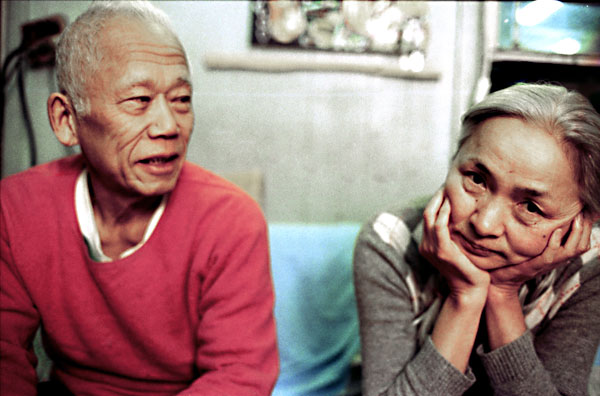 The 40-year marriage of two visual artists – action painter Ushio Shinohara, who rose to fame in the Sixties, and his wife Noriko, who is anxious to shed her reputation as her husband’s reluctant assistant and achieve her own art objectives – is explored in this documentary. Or maybe it’s more accurate to say that the artistic careers of two individuals – a man and a woman who’ve been married for 40 years – are examined in this film in which the separation between art and life is fairly nonexistent. It’s a tribute to Zachary Heinzerling’s observational filmmaking (he won the Directing Award for this film at Sundance) that the fluidity of their personal and professional lives is conveyed to the viewer.

Fluidity, however, should not imply that these relationships are placid and tranquil. Along with love, long-simmering personal resentments and professional jealousies sustain the Shinoharas’ marriage. Poverty and alcoholism also factor into the couple’s struggles. Ushio was a successful artist in Japan before emigrating to New York in 1969, where his action art met with less popularity as the years passed. Noriko arrived from Japan in 1972, a student who was 21 years Ushio’s junior. The two were immediately smitten, and found themselves pregnant six months later. Before long, Noriko found herself burdened with tending to an infant son and an alcoholic husband. Her art career fell by the wayside as she became more of an assistant to Ushio’s large-scale art endeavors. Sadly, it sounds like the stuff of far too many American marriages.

Opening on the morning of Ushio’s 80th birthday, Cutie and the Boxer is also a portrait of marital endurance. Love and acceptance are evident despite the marriage’s rocky road. Images of their present-day lives are supplemented with documentary news footage and home movies taken over the years. These days, Noriko has begun painting again in an illustrative style quite antithetical to Ushio’s boxing paintings (in which he pounds splotches of paint onto the canvas with boxing gloves). Cutie is a fictionalized, almost cartoonlike version of Noriko into which she pours her marital frustrations and imagined resistance. (The work of this pair reminds me somewhat of another couple, cartoonists R. Crumb and Aline Kominsky, whose marital life is splayed across their panels.) Also, the wolf is always at the Shinoharas’ door, and the struggle to make their rent is quite palpable.

For all the difficulties of their lives, Heinzerling encourages the viewer to think this pair wouldn’t have it any other way. Whether that’s really true would have required a depth of probing that is not attempted here. Heinzerling allows us to read whatever we want into this picture. The endless struggle for money and professional recognition is either a curse or a raison d’être.

Cutie and the Boxer, Zachary Heinzerling