They invite us to buy detergent, go to the movies, and refrain from mixing certain kinds of medications. They are the voiceover artists – never seen, only heard – but in this ensemble charmer, they get the spotlight for once.

The title refers to the phrase made famous by the real Don LaFontaine, who, until his recent death, was the king of movie-trailer narration. When a fictional film studio in In a World … decides to revive his catchphrase for their upcoming release of a Hunger Games-like production, every guy with professional pipes is jockeying for the gig. But there’s a dark-horse candidate, and he is a she. Better yet, she’s played by Lake Bell, a coltish beauty with a bawdy underskin; she also has the best play-dumb mug since Judy Holliday.

Bell plays Carol, a vocal coach and expert mimic of accents who aches to break into the male-dominated voiceover industry. For a role model, she need look no further than her dad Sam (Melamed, with a killer delivery, like honey-baked ham). He’s a titan in the field but a firm believer in the old-boy network, which means Carol can add “daddy issues” to an already impressive list of hang-ups. See also: irregular employment; cluelessness when it comes to the male gaze, including the puppy-dog eyes of eternal nice-guy Louis (Demetri Martin); and homelessness – she’s crashing in the cramped apartment of her sister and her husband, played by Watkins and Corddry, whose marital problems movingly ground the film when it balloons too close to caricature with its many outsized personalities.

In a World … is an ambitious comedy with not-negligible dramatic depth, but Bell, a first-time feature writer and director, is frankly too generous with her large cast. She’s too willing to draw the focus from her heroine, which means Carol and her message of empowerment come out half-cooked. There’s an ill-sitting bit in which Carol shames another woman, insisting she’ll never be taken seriously with her “sexy baby voice” – a glass-house complaint from a thirtysomething professional who dresses like a fourth-grade, arts-and-crafts camper.

Still: In a world in which cookie-cutter, unchallenging movie heroines are assembled according to Hollywood’s cynical assumption that Jane Q. Public is a flaming idiot, Bell’s breath-of-fresh-air creation definitely has something interesting to say. 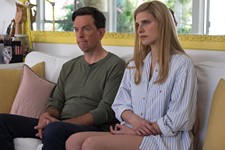