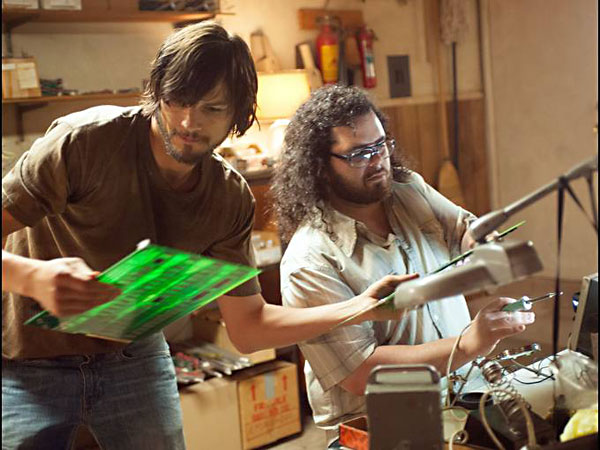 Trying to encapsulate the story of Apple Computer co-founder Steve Jobs (Kutcher) within the framework of a two-hour biopic is a fool's errand. Better this had been an HBO miniseries. Jobs' remarkable life and persistently prickly personality are simply too complicated and his roller-coaster ride to the top of the personal-computing business is simply too crammed with improbable side trips and switchbacks to distill into 128 minutes. But screenwriter Matt Whiteley, debuting here, gives it his all, as does That 70s dude Kutcher, who's clearly watched a lot of video of Jobs. Kutcher, preemptively ridiculed by nearly everyone when it was announced that he'd nabbed the coveted role, nails Jobs' marionette stride and cagey facial demeanor, tics and all, fairly brilliantly. (And Josh Gad's sympathetic, moving portrayal of Apple co-founder Steve Wozniak, is even more accurate, more familiar.)

But Jobs, which focuses on the genius entrepreneur's early years before ending – or, rather, beginning – with the introduction of the game-changing iPod in 2001, glosses over plenty of salient material (Jobs’ acquisition, in 1986, of what would later be Pixar, for one) in favor of already twice-told tales of formative LSD experiences, home-brew computing, and nefarious boardroom doings. It fails to rise above the inherent limitations of the traditional Hollywood biopic and it's about as insanely great as a Mac "low cost" LC model – which was, to be fair, pretty cool.

Kutcher, though, turns in a solid performance in the face of a problematic script. He shuffles, cajoles, screams, and finally turns to the dark side, kind of, which is signaled not by his acquisition of a rival company but of a midnight-black Porsche 911. What's missing, and indeed key to any but the glossiest understanding of the ridiculously complicated Jobs, is any real comprehension of the clocklike inner workings of Jobs’ psyche: why he did, exactly, what he did. His humble beginnings hardly forecast the fact that I'm writing this review on a MacBook Pro with a Thunderbolt monitor, while texts on my iPhone and iPads keep interrupting my train of thought as I download music to my iPod in the background. That in itself is hard enough to wrap my head around, and the Steve Jobs of Jobs, while a game attempt, is equally inexplicable. 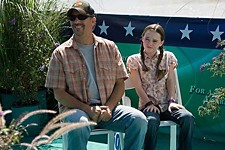 Swing Vote
Kevin Costner’s new comedy may be timely, but that doesn’t make it funny or worthwhile.