The Act of Killing

”History is written by the victors,” observed Winston Churchill. However, in this canny documentary, Churchill’s truism gets a makeover. The Act of Killing allows the victors a forum to elaborate on their story, and, by their own hands, these aged conquerors unwittingly rewrite aspects of the history that has propped them up for so many decades.

The place is Indonesia and the events under review in The Act of Killing took place between 1965 and 1966. The country’s first president was overthrown in a military coup in 1965, which led to a violent purge by the army of anyone suspected of being a Communist. The term was loosely applied and included activists involved in the struggle against Dutch colonialism, trade unionists, opponents of nationalization, and all ethnic Chinese. It’s estimated that nearly one million Indonesians were killed over the course of one year, although the true figure remains unknown to this day. The army’s efforts were supported by Western powers, and the soldiers were also assisted in their mass killings by civilian paramilitary groups and independent gangsters. Nearly 50 years later, these murderers remain honored and respected figures in Indonesian society, although the smiles and respect many of the citizens display toward them barely mask generalized fear and acquiescence.

Anwar Congo and his friends were among the gangsters recruited in North Sumatra to carry out the killings. These aging men are a boastful lot and take great pride in having killed 1,000 people, give or take. They are also avid movie fans, and especially crazy for American films. Joshua Oppenheimer and his co-directors take the curious tack of having these men re-stage their former exploits for the screen, using any styles they choose or can imagine. The gangsters’ candor is shocking but not surprising, since they are still powerful figures and there’s never been anything like a Nazi hunter looking for them. Congo chillingly demonstrates his favored killing technique, the garrote, and cuddles fondly with his grandchildren while viewing video playbacks of scenes. The gangsters talk about how much pleasure they derived from American movies and how watching Elvis Presley or Humphrey Bogart on the screen prior to murdering their fellow Indonesians put them in a happy frame of mind for their work. Guilt and regret are not part of their vocabulary, although Congo confesses to frequent nightmares. A discussion two men have about the differences between cruelty and sadism proves enlightening.

The movie styles the gangsters use range from deep-shadowed film noir to surreal Asian song-and-dance spectacles. And the more they talk and re-enact their former deeds, the starker the reality that’s before us becomes. It comes as little surprise that Errol Morris and Werner Herzog, both masters of sly documentaries in which the subjects nail themselves with their own words, are the executive producers of Oppenheimer’s film. Like any movie about making movies, The Act of Killing has some downtime during which the project seems to be spinning its wheels. I don’t know what the future holds for Anwar Congo and his cronies, but I guarantee that you’ve never encountered any screen figures as memorably disturbing as these men.

Joshua Oppenheimer will conduct a Skype Q&A after the 2pm matinees on Saturday and Sunday at Alamo Drafthouse Slaughter Lane. See “Making a Killing,”  p. 38, for more on the film. 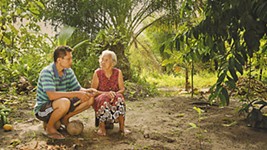 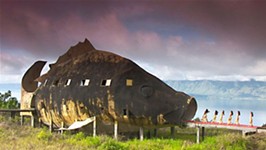 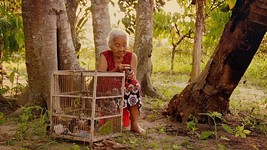